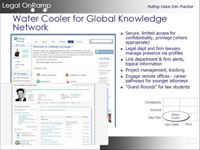 Take a look at an ORX screen; click image to enlarge.

However, if the knowledge management team at Cisco Systems Inc. has its way, the Silicon Valley-based giant will extend its online collaborative system, OnRamp Exchange, to broaden the flow of information with outside counsel and, eventually, industry peers—making ORX a tool that may make some law firms uneasy.

ORX is a product of Legal OnRamp, and other corporations can license the system through that platform. It leases for $49,500 a year.

“A lot of law firms don’t have the predilection to collaborate and share,” says Risa Schwartz, the head of knowledge management for Cisco’s legal department in San Jose, Calif. “Many do, but those are avant-garde.”

Virtual deal rooms—central Web forums where law firms host documents and grant varying degrees of access to firm lawyers, clients and opposing parties—aren’t new. Deal rooms typically remain active until a matter closes and clients transfer data to their own servers. However, Schwartz says these forums are often nothing more than static repositories for documents, statutes and clauses.

“Context is everything,” she says.

Clients benefit from the background information provided by collective e-mail conversations among counsel, Schwartz says, as well as the ability to view the various stages of related memorandums, analysis and recommendations on a particular matter. Increased transparency and instant access to live updates of all relevant data also improve client confidence with regard to billing.

Ultimately, Schwartz envisions an even greater push and pull of information between firms and their in-house counterparts—one that in-vites outside counsel to actively participate in internal electronic discussions and company question-and-answer forums, and grants access to client playbooks that can include approved clauses, fallback provisions and negotiation guidance.

“We’ll first look for ways to bring outside counsel into our playing field,” Schwartz explains, “and then the reverse.”

Steven Harmon, senior director of Cisco’s legal services, warns law firms to avoid platforms that create barriers and dependency. For example, Harmon suggests wider access to certain firm databases (and even redacted briefs) might satisfy a client’s needs without additional, costly analysis and review by an associate or partner.

“I question whether a law firm has added value beyond the first author-ing of a memo when they repackage [a prior] memo for me,” he says.

Harmon also points to industrywide standardization of nondisclosure agreements and the swarm of memos sent to Cisco’s legal department every time a major case breaks as opportunities for collaboration among law firms and clients.

“We may read only two of the 10 memos sent. The rest should be put in a searchable repository,” Harmon says. “Firms that do that are in a better position to get the novel questions brought to them. That’s where they will make money in the future.”

“Everyone drives a car, but not everyone drives a Formula One race car,” Pais analogizes, comparing the needs of a robust M&A practice like that at Cisco to those of other clients that may conduct just a few deals each year.

Tension between clients and firms may also rise from a significant push for greater access to law firms’ institutional knowledge, particularly access to research and analysis done for other clients, which may lead to malpractice concerns. And all law firms uniquely develop their own deep expertise in specific areas, which is part of the services they sell to clients. While many publish vast amounts of information for clients, most would likely balk at the idea of a central repository for clients to peruse.

Even in the collaboration-friendly tech industry, “people share just enough information to get others excited,” Pais says. “But they don’t share the secret sauce.”

Still, Harmon says, the end goal is increased productivity on both sides, not to undercut the profitability of outside counsel.

“It’s about a win-win for both the company and the law firm,” Harmon says. “Firms that get efficient at providing these services will be able to serve more clients with fewer lawyers.

“Revenues per partner may even go up,” he says. “It just may mean there are fewer partners.”