Synthetic DNA may help reduce fraud in the art community 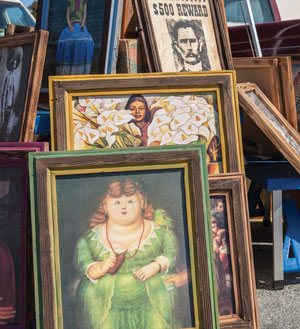 Art has long been used for nefarious purposes, including money laundering and tax evasion. And the art market is increasingly plagued by fakes and sophisticated forgeries, which not only cost unsuspecting buyers millions each year but also result in the plummeting confidence of potential buyers.

The Global Center of Innovation at the State University of New York at Albany is working to combat those issues by building a system of transparency in art sales through synthetic DNA. The system would use lab-created molecules—not the personal DNA of artists—that would be inserted into artworks as a secure way of verifying both authenticity and ownership. The tags would be invisible and not easily subject to tampering, but they’d be easily read by a scanner linked to a database with definitive information about the piece, thereby thwarting theft and forgery. With all sales traced, itwould be far more difficult to use artworks for unlawful deals, and developers are hoping this new authentication system will transform the art market.

“From a financing perspective, advances in synthetic DNA lower the risk in this asset class and theoretically encourage more use of art as a tradable commodity,” says Washington, D.C., lawyer Cari Stinebower of Crowell & Moring. “The illicit trade in antiquities and art has survived because of the opacity of deals, but the potential for tagging and tracking a work brings more confidence that the transactions are above board and permissible.”

The art industry is the largest lawful, unregulated industry in the world, generating $60 billion to $1.25 trillion in annual sales worldwide, according to Lawrence Shindell, chairman of Aris Title Insurance Corp., which specializes in underwriting art and is helping to fund the SUNY project. “Art is important as the cultural record of society, and in the art industry, high-value objects move around the world frequently.”

As a result, art touches many segments of the law, including trusts and estates, governmental authority (such as border control), financial institutions (which lend against art as collateral) and political treaty enforcement (related to terrorist financing), explains Shindell, who is also a lawyer. “All stakeholders must be able to interact reliably around art objects so they have a common interest in asset integrity.”

The synthetic DNA will offer value akin to what vehicle identification numbers give to the automobile industry, he adds. “The entire global supply and distribution chain in the automotive industry works effectively because VIN numbers uniquely identify each automobile. Cars without VIN numbers present risk and negative market opportunities such as money laundering. VIN numbers create a means of systemic and interoperable interaction” and the synthetic DNA will work similarly.

While the specifics are vague, synthetic DNA markers will work across the range of media—from textiles to photographs, from paintings and sculptures to antiquities such as a 3,000-year-old Native American arrowhead, according to Shindell. The process, he says, will involve several technologies functioning together “in the same way that someone using an iPhone can speak to another person using a Samsung phone.”

Right now, SUNY is working with a group of first-adopting artists and museums, and the system should be up and running in beta form later this year. By design, the developers are following an unhurried developmental process in an effort to generate market engagement and confidence. “This dynamic will work because it approaches solutions systemically and not in a vacuum,” Shindell says. “Each ecosystem participant must have the confidence that other stakeholders will similarly be confident in the standards-based technologies.”

This article originally appeared in the April 2016 issue of the ABA Journal with this headline: “Art in Fact: Synthetic DNA may help reduce fraud in the art community.”