Techshow 2015 tackles ethics, the skills gap and the latest gadgets 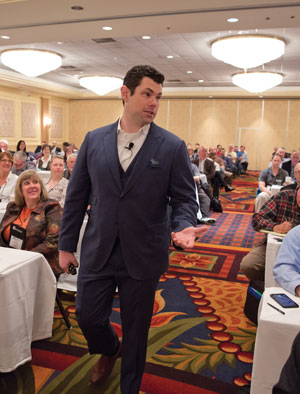 From paperless practice to glitter bombs, from testing lawyers’ tech skills to outfitting them in the latest wearable technology, ABA Techshow 2015 covered a lot of bases while highlighting the new.

A good example came on the mid-April event’s last day, when attorneys’ technology know-how was brought to the forefront.

When it comes to fulfilling their ethical obligation to keep abreast of developments in technology, lawyers are increasingly fighting a two-front war. On the one hand, they have to make sure their own basic technological skills are good enough to operate routine office software. But they also are expected to learn about new, cutting-edge tools and methods and how those advances can affect their legal practice.

In the plenary session, Andrew Perlman, incoming dean at Suffolk University Law School, and consultant D. Casey Flaherty (above) of Cost Control in Austin, Texas, called for changes in how lawyers are trained and tested in their use of legal technology.

According to Perlman, who served as chief reporter for the ABA Commission on Ethics 20/20, the big game-changer was when the association modified the ABA Model Rules of Professional Conduct, adding a requirement that lawyers be competent in using legal technology. The change, in the form of a comment to Model Rule 1.1, was approved by the ABA House of Delegates in August 2012 and enacted in February 2013.

“For the first time, the Model Rules included a magical word: technology,” Perlman said. “It was the first time that there was any acknowledgement that a lawyer’s ethical responsibilities may, in some way, relate to technology.”

Perlman pointed out that a lot of legal work is becoming standardized, systematized, packaged or commoditized, and the available work for humans is shrinking.

Even dispute resolution, the epitome of mano-a-mano adversarial legal work, is becoming co-opted by machines, at least in part. To illustrate his point, Perlman spoke of a dispute he got into with another user on eBay and how the auction site resolved the entire matter with an automated portal that did not require human intervention.

SEEING A LACK OF SKILLS

However, not all technological struggles for lawyers will be waged with the machines of the future. Flaherty, a former in-house counsel at Kia Motors, flatly stated that many lawyers lack even the basic skills when it comes to technology.

“This comes down to the myth of the digital native,” Flaherty said. “Just because someone gets a Twitter account in utero doesn’t mean that they’re suddenly an expert on all things tech. Technology is a learned skill.”

Flaherty came up with the Legal Tech Audit, which tests lawyers’ expertise with the basic office software programs Microsoft Word, Microsoft Excel and Adobe Acrobat. Flaherty was inspired to create the audit during his tenure at Kia.

Flaherty put his outside law firms through a version of the audit and then worked with them to improve their workflow and efficiency. “In one year, I reduced my bills by 17 percent,” said Flaherty, who revealed that he offered to cut another firm’s bills by 5 percent until they passed the audit but was rebuffed.

To help solve the technology gap, Perlman and Flaherty both called for changes in the way lawyers are trained and taught. Perlman, who chairs the Institute on Law Practice Technology and Innovation at Suffolk, pointed out that forcing lawyers to look to the future of legal service runs counter to how they’ve been trained to think.

“Law students are still trained to look at precedent,” said Perlman. “They’re looking backwards, rather than forward to the future of legal services.”

In that vein, Perlman pointed to Suffolk Law’s new Accelerator-to-Practice Program, which creates a fee-generating law firm inside the school and provides students with training in traditional legal skills, as well as technology, business development and marketing. Flaherty, who encouraged law firms and students to take the audit, suggested that law schools shouldn’t just teach technology but embed it in the existing curriculum. Flaherty suggested that students can take a traditional contracts class and then learn how to use Word to format or modify an actual contract.

“Ultimately it’s up to clients—they’re the ones who wield the hammer,” Flaherty said. “Lawyers don’t always have time to work smarter. It’s up to clients to tell them that they have to.”

Wearable Tech: Attorneys Rick Georges and Robert Sisson talked about how wearable technology has enhanced their ability to practice law on their own terms. Showing off a large collection of smartwatches, virtual reality devices and other gadgets, Georges and Sisson talked about their favorite devices (Sisson liked the Asus ZenWatch, while Georges boosted the Samsung Gear S) while providing examples of how they used the products in their practices.

“I use my smartwatch every day in court,” said Sisson, a criminal defense lawyer in Appleton, Wisconsin. “I can’t use my smartphone in court, so the watch is a great way to check messages or receive notifications.”

Paperless Offices: In a packed conference room, Bryan Sims of the Sims Law Firm in Naperville, Illinois, and Jim Calloway, practice management adviser for the Oklahoma Bar Association, provided some tips for lawyers looking to get out from the never-ending avalanche of papers, file folders and boxes.

Among the rules they recommended was to have a strict naming convention for files and to come up with a standardized workflow for every employee in the office. And Sims offered a solution for what to do with paper documents: “Often, I’ll send it to the client because they might want them for their own files. I’ve also found that my clients like getting mail from me that isn’t a bill.”

Infographics: The best way to make complex matters in litigation simple is through the use of infographics, says veteran trial lawyer Randy Juip, a partner at the Livonia, Michigan, firm of Foley, Baron, Metzger & Juip. For inspiration, Juip recommended checking out Dadaviz and statistician Nate Silver’s website FiveThirtyEight, both of which have mastered the art of presenting complex data visually.

60 Sites in 60 Minutes: Outgoing Techshow chairman Brett Burney, principal of Burney Consultants in Chagrin Falls, Ohio, recommended Hipmunk, a powerful website that allows users to search almost every airline carrier for ticket prices and book directly with the airline without leaving the site. Burney also mentioned TripIt, a website (and app) that allows users to put their plane tickets, hotel reservations and car-rental information all on one screen, instead of having to carry around several different pieces of paper. Herbert Dixon, a now-retired judge of the Superior Court of the District of Columbia, suggested VirusTotal, which analyzes files or URLs for viruses or malware. And Mark Unger of the Unger Law Firm in San Antonio, Texas, brought up Ship Your Enemies Glitter, a site that delivers glitter bombs to people you don’t like.

This article originally appeared in the July 2015 issue of the ABA Journal with this headline: “Talking Technology: Techshow 2015 tackles ethics, the skills gap and the latest gadgets.” 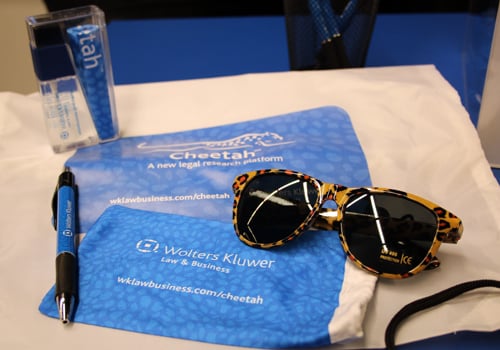 Freebie: Although I was initially drawn to the booth by a glasses cleaning kit, the real prize jumped out in the form of cheetah patterned sunglasses, just in time for summer fun.

The Pitch: “Designed in partnership with our customers, Cheetah™ is a new, intuitive interface developed with a full understanding of your legal research workflow combined with the insights and expertise that only Wolters Kluwer can deliver.”

On the Web here.