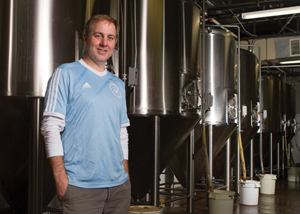 Michel Peticolas says the distribution law is like forcing authors to give book rights to publishers for free. Photo by Danny Duran.

Michael Peticolas, a Texas trial lawyer-turned-craft brewer, is causing a real brewhaha for beer regulators in the state.

Two years ago, Peticolas was in negotiations with a major alcohol distributor to ship his Velvet Hammer beer to bars throughout Texas.


"It is an imperial red ale that is 9 percent alcohol," he brags. "Smooth as velvet; hits you like a hammer."

Proceeds from the sale of his distribution rights would have helped him expand his business and add employees. Then, in May 2013, Texas passed a law making it illegal for craft breweries to accept money from distributors.

"These Texas officials, who gloat nationally about being pro-small business and anti-regulation, just took away my property rights, which is a very un-Texan thing to do," says Peticolas, a fifth-generation lawyer whose great-great-grandfather opened a law office in Victoria, Texas, in 1865. His great-grandfather was the first chief judge of the state court of appeals in El Paso.

Last December, Peticolas and two other craft brewers joined together to sue the Texas Alcoholic Beverage Commission in state district court in Austin, claiming the new law violates the takings clause of the Texas Constitution.

Chip McElroy, president of Austin-based Live Oak Brewing, says he joined the lawsuit because the Texas law "took my beer off the shelves in Dallas-Fort Worth, San Antonio and other parts of Texas where Live Oak beer would otherwise be available."

Austin lawyer Matt Miller of the libertarian-leaning Institute for Justice says this is a clear property rights case. "There is no public purpose to this law. Texas is simply using the public power of the legislature for the private gain of beer distributors.

"Amazingly, the law forces breweries to give up their distribution rights for nothing, but distributors can turn around and resell those same rights for whatever price the market will bear," Miller says. "This case will determine whether Texas brewers can keep these valuable property rights in the businesses they built."

The Texas attorney general is representing the state beverage commission and declined to comment.

When Prohibition was repealed in 1933, Texas divided the alcohol business into three sectors: brewers, distributors and retailers. While the law required these business sectors to be independent of each other, it didn't prohibit breweries from selling their distribution rights.

"This law is like the government forcing authors to give the rights to their books to publishers for free," says Peticolas. "I spent a career protecting people's rights. Now the Texas legislature has taken away my rights.

This article originally appeared in the May 2015 issue of the ABA Journal with this headline: "Beer Fight: Texas craft brewers sue the state over a law restricting their distribution rights."