'The personal attacks on judges and prosecutors must cease,' ABA president says 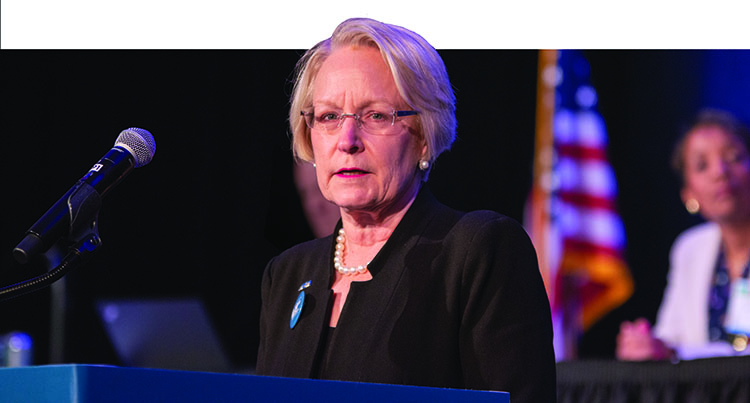 Americans of all backgrounds are paying more attention to issues of justice, ABA President Judy Perry Martinez told the House of Delegates at the 2020 ABA Midyear Meeting in Austin, Texas.

“They’re talking about due process and evidence, attorney-client privilege, fair trials and just punishment—the imperative of the oath to protect and defend the Constitution, no better demonstrated than when lawyers and public servants operating within the framework of law are able to do so free from obstruction, intimidation and retribution,” Martinez said.

“However rough our current places and spaces are, however long the arc of the moral universe may be, justice is and always will be our guidepost,” she added.

Martinez said the ABA and the Conference of Chief Justices, along with the National Center for State Courts, continually address the issues presented by their shared mission of judicial independence, a fair and impartial judiciary, access to justice, and a strong legal profession that supports the rule of law.

She contended that all bar associations are responsible for ensuring the public understands the importance of an independent justice system.

“The personal attacks on judges and prosecutors must cease,” Martinez said, receiving a standing ovation. “No one—no one—should interfere with the fair administration of justice.

“And no one—no one—should have to live in fear for following the law and upholding our Constitution.”

Martinez cited a recent report from the Center for Strategic and International Studies showing that foreign actors are undermining the United States by spreading messages on social media that increase public divisions and mistrust of democratic institutions, including judges a nd courts.

She said the report also calls for efforts to promote understanding of the justice system, and she referenced the ABA’s longtime leadership in public education through several initiatives, including the Judicial Division’s National Judicial Outreach Week, Law Day, and the Division for Public Education’s National Civics and Law Academy.

Martinez said the ABA promotes public awareness and advocates for fair and impartial courts through the Standing Committee on the Federal Judiciary’s efforts to evaluate nominees for lifetime positions on the federal bench. Its Governmental Affairs Office also works with volunteers across the country to support court funding and security, criminal justice reform and access to justice.

Martinez told the House that despite four years of federal government-backed proposals to defund the Legal Services Corp., ABA members have advocated for the organization and assisted in helping allocate a record amount of funding to it this year. She pointed out that the ABA encourages pro bono service through a number of in itiatives.

“Despite our successes, we cannot deny that legal aid funding and pro bono will never come close to fully addressing our nation’s unmet legal needs,” Martinez said. “We—the ABA, the leaders of state and local and affinity bars and our affiliated organizations—need to encourage bold thinking and urge robust discussion and data gathering about ways to deliver greater efficiencies for lawyers and the potential for meaningful innovations in the long-overdue delivery of justice for all.”

Reginald Turner, who became the ABA president-elect nominee at the meeting, also addressed the House.

Turner is a member of Detroit-based Clark Hill, and he has served as chair of the ABA House of Delegates Rules and Calendar Committee, the Committee on Issues of Concern to the Profession, and the Committee on Credentials and Admissions. He is also a past president of the National Bar Association and the State Bar of Michigan.

He told the House he has seen the lawyer’s oath come alive each day through the work of lawyers and judges, and particularly throug h the ABA.

Turner also said the obligation to pursue access to justice—or what he calls “true justice”—can be fulfilled in many ways, including through pro bono publico. Even if attorneys are unable to take cases for people who cannot afford legal services, he encouraged them to support ABA entities that help meet this obligation.

This article was originally published in the April/May 2020 issue under the headline, “The Body Politic: ‘The personal attacks on judges and prosecutors must cease,’ ABA president says.”