The Capital of Rape: Fighting Widespread Sexual Violence in the Democratic Republic of the Congo 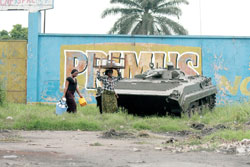 Congolese women walk past one of four tanks stationed—along with soldiers—in the area to preserve order in the wake of a contested presidential election in November. Photo by Junior D. Kannah/APP/Getty Images

Rape has become a tragic fact of life for many women in the Democratic Republic of the Congo. Human rights experts say sexual violence has been one of the defining characteristics of the brutal conflict that erupted in the DRC in the mid-1990s, when a civil war in neighboring Rwanda spilled over its borders. Estimates put the death toll in the DRC as high as 5.4 million people, making it the deadliest conflict since the end of World War II. Various peace accords have been brokered starting in 2003, but the violence has persisted, especially in the eastern part of the country.

The United Nations estimates that some 500,000 people have been raped or subjected to sexual violence since the conflict erupted in 1996. Some attacks have targeted boys and men, but the vast majority of victims have been women and girls. A paper published last year in the American Journal of Public Health suggests that the incidence of rape in the DRC is even higher than the U.N. estimates and spreading beyond conflict zones.

“Regardless of the victim’s gender, rape is used as a weapon of war,” states an article by Michael Maya on the website of the ABA Rule of Law Initiative. “It has proven to be remarkably effective, destroying not only the lives of its victims but also their families and sometimes entire villages. Particularly in the case of girls and women, rape survivors are frequently rejected by their families and communities,” states Maya, the initiative’s deputy director. He directed its programs in Africa from July 2007 until February 2011.

A growing concern is that rape and other types of sexual violence are becoming more prevalent throughout the DRC. “Initially, rapes were almost entirely restricted to conflict zones and committed by armed combatants,” states Maya in his article. “With each passing year, however, more and more rapes are being committed by civilians, some of whom are former soldiers who continue to rape upon returning to their villages and cities as noncombatants.” Sexual violence between intimate partners also appears to be on the rise.

By and large, the perpetrators carry out their attacks with impunity. Very few rape survivors ever see their attackers apprehended, prosecuted or punished.

“Rape has become almost pandemic, and there is a culture of violence,” says Amii Omara-Otunnu, executive director of the Institute of Comparative Human Rights at the University of Connecticut in Storrs. “A pathology like this spreads in places where you have a demise of the rule of law and a collapse of the education system. The antidote is to have effective institutions promoting the rule of law.”

The ABA Rule of Law Initiative is a key player in the international effort to reverse these patterns in the Democratic Republic of the Congo. Over the past few years, the initiative has been building a series of programs aimed at creating support services for survivors of rape and other forms of sexual violence, educating the public, and bringing perpetrators to justice.

“Congo is the site of the largest rape crisis in the world, and one of our largest and most complex systems of programs,” says Rob Boone, ABA ROLI’s director. “To have any trial, the survivors have to be willing and able to identify their assailants. To effect change, it is critical that we work in a multidisciplinary way so that survivors have the support of not just legal professionals but other professionals who can help them.”

This approach is consistent with the initiative’s mission to help strengthen the rule of law as the most effective way of combating poverty, reducing corruption and ending disregard for human rights. The initiative sponsors legal reform programs in more than 50 countries around the world. These programs put an emphasis on strengthening local institutions and supporting the efforts of local judges, lawyers, administrators and legislators.

In the DRC, for instance, ABA ROLI maintains legal clinics in 16 towns in three provinces, each of which uses an “integrated holistic model” by partnering with local hospitals and social service providers. In Africa, the initiative also maintains programs in Liberia and Mali.

“To people who have been abused and have had no one to protect them, ABA ROLI is a safe place, a place to find justice,” says Stephen N. Zack, the ABA’s immediate-past president who now chairs the board of the Rule of Law Initiative. “We believe it has been successful. We only wish we could reach more people,” says Zack, who is administrative partner at Boies, Schiller & Flexner in Miami.

From January 2008 to October 2011, ABA ROLI programs in the DRC have provided legal counseling to 5,818 survivors and initiated more than 5,100 cases against alleged rapists. Those cases led to 716 trials resulting in 424 convictions.

That’s a high conviction rate, says Natacha Thys, senior legal adviser for the initiative’s Africa Division. “When we went in, nobody thought this was possible. But as it turns out, this is something that judges seem to think is an affront to their own culture, so they take it seriously.”

In addition, ABA ROLI works with local partners to provide free medical attention, psychological counseling and legal assistance to survivors of rape and sexual violence. Right now, the initiative has a staff of about 120 local lawyers and other professionals helping in these efforts. The programs also concentrate on community outreach and education seeking to change attitudes regarding women’s rights and sexual violence.

One of the biggest obstacles to these efforts is geography. The Democratic Republic of the Congo is one of the largest countries in sub-Saharan Africa, and travel can be difficult in the country’s remote regions.

“I have seen women come to our clinics who have traveled distances you can’t even imagine, just to get to a clinic, sometimes with a child on their back,” Thys says. “I’m struck that what we can take for granted—that we can go to a lawyer and go to court—is something extra ordinarily difficult for these women. That you have women making such efforts and showing such hope in the system, that’s significant.”

For some, the process has been made easier by the introduction of ABA ROLI’s mobile court program to ensure that survivors have access to justice without having to travel from a remote area to an already overburdened court in a more populated area. Under the program, which operates in accordance with Congolese law, temporary courts are set up in villages for up to two weeks for the purpose of hearing a variety of matters, including rape cases. Typically, these mobile courts are held outside, often under a tent. (Like many other ABA ROLI efforts, the mobile court program receives funding from outside organizations.)

“It’s easier to bring a mobile court to these remote regions than trying to get all of the people involved—lawyers, judges, court clerks, police, witnesses, survivors—to a courthouse that might mean days of travel for the local participants,” Boone says.

There are success stories. Clementine Kavira, a 25-year-old Congolese woman, describes the assistance she receives through the initiative. Speaking via Skype from the ABA ROLI office in Goma near the Rwanda border, Kavira says she and her sister were walking near a farm in her home region. A man followed them and then demanded money from her. When she said she had nothing to give, he pushed her down and began beating and attacking her.

“I was with my little sister, and I told her to go home and call our brother,” says Kavira. “The man and I stayed there fighting because he was trying to rape me and I was resisting.”

Eventually her brother arrived, chased the man down and took him to the police. Kavira’s attacker is now being prosecuted, and Kavira has undergone legal, medical and psychological counseling, courtesy of ABA ROLI. She also receives financial help to travel to Goma to pursue her case. “I am very happy for the support,” she says.

Some of the initiative’s efforts focus on post-rape issues, especially when husbands or other family members want to treat a rape survivor as an outcast. Thys describes cases where, thanks to the mediation efforts by local lawyers, women were permitted to stay in their homes, receive their rightful inheritance and stay connected with their children.

In addition, Thys has seen an increasing number of women express a willingness to voice their rights in matters of nonsexual violence and property rights cases. “These results are meaningful,” she says, “for long-term sustainable change.”