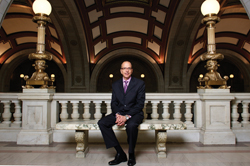 The world’s elderly population may be the next frontier in efforts to create an international system for protecting human rights. That process began in the immediate aftermath of World War II, with the creation of the United Nations in 1945.

In 1948, the U.N. General Assembly adopted the Universal Declaration of Human Rights. While the declaration does not have the legal force of a treaty, it has come to be widely viewed as a fundamental statement of human rights and the basis for agreements that have sought to enforce human rights through “hard law” because ratifying nations agree to be bound by their terms. Those agreements include the International Covenant on Civil and Political Rights (ratified by the United States) and the International Covenant on Economic, Social and Cultural Rights (not ratified by the U.S.).

Only within the past few years has attention begun to focus on efforts to bring the elderly within the protections of international human rights agreements. Past U.N. efforts in the area, most notably the Madrid International Plan of Action on Aging, adopted in 2002 by 159 nations, have been “soft law”—primarily aspirational in nature. But more recently, momentum has been building to protect the rights of older people through hard law, such as a convention similar to those relating to children, women and people with disabilities. In December 2010, the U.N. General Assembly established an open-ended working group on elder rights.

The ABA’s policymaking House of Delegates expressed its support for those efforts during the association’s 2011 annual meeting in August, when it approved a resolution (PDF) sponsored by the Commission on Law and Aging that urges the U.S. Department of State and the U.N. to support efforts “to strengthen protection of the rights of older persons, including the efforts and consultations toward an international and regional human rights instrument on the rights of older persons.”

“Older people experience discrimination and the violation of their rights at family, community and institutional levels,” says Jeffrey J. Snell, an attorney in Sagamore Hills, Ohio, who chairs the Commission on Law and Aging. They “face more barriers as they become more dependent upon others. This means older persons are often more susceptible to neglect and abuse. An international convention is needed to ensure that older persons are given the respect and dignity that we all deserve.”

While some have argued that the rights of senior citizens are implicitly protected—along with the rights of everyone else—in existing international human rights documents, Snell and others argue that something more is needed, even though the U.N. has issued at least 17 documents on aging since 1948.

The commission’s report supporting its resolution to the House notes that an aging population is a worldwide phenomenon. During the first half of the 21st century, the report states, people over age 60 will increase from 10 percent to 20 percent of the world’s population—from about 600 million people to almost 2 billion.

In the U.S., the baby boom generation is entering its retirement years. Debilitating health issues like Alzheimer’s disease are becoming more common, and many older people are victimized by financial exploitation, says Peter G. Wacht, executive director of the National Academy of Elder Law Attorneys in Vienna, Va. Meanwhile, the future of government programs that help meet older people’s needs, such as Medicare and Social Security, is uncertain, he says.

The Elder Justice Act, passed by Congress in 2010 as part of the Patient Protection and Affordable Care Act, represents the first attempt to address issues of elder abuse, neglect and exploitation through federal law, says Edwin M. Boyer, president of the NAELA and a partner at the Sarasota, Fla., firm of Boyer & Jackson.

Boyer represents an older Florida woman whose grandson moved down from Vermont, ostensibly to care for her so she wouldn’t have to live in a nursing home. He then took care of himself while draining $100,000 from her bank account to buy a Porsche and fancy dinners for his girlfriend, among other goodies.

“She wasn’t able to make personal and financial decisions on her own, and he took advantage of that,” says Boyer. Now “she is penniless, and [her grandson] is in jail. She’s destitute. She’s having a hard time finding a place to live.”

Gut-wrenching as such stories are, however, they’re nothing compared to what the elderly face in parts of the developing world, Wacht says. “It’s nowhere near what older people face in sub-Saharan Africa or some Asian countries,” he says. “That’s one of the challenges when you’re trying to put an international convention in place.”

Given the continuing growth of the world’s population of older people, “these areas of jeopardy will become that much more magnifying,” says Charles P. Sabatino, director of the ABA Commission on Law and Aging and a past president of the NAELA.

“Now is the time to deal with that.” The Madrid plan, Sabatino says, “has no enforceability. It’s an academic exercise in place to see whether it’s making a difference, not a real human rights mechanism.”

Wacht agrees that the Madrid document doesn’t go far enough. “It’s all well and good to put forward a philosophy,” he says, “but it doesn’t mean a whole lot unless you put forward a way for these countries to get there—and measure success.

“The Madrid plan does a good job of reaffirming commitment to eliminating age discrimination and neglect,” Wacht says, “but it doesn’t necessarily say: ‘Here are the steps you can take to make this happen.’ ”

Even though the U.S. government has refrained from ratifying most recent human rights conventions, Sabatino and others say they still influence U.S. law. “Their influence is subtle, but important,” he says. “They seep into American law and culture.”

The Convention on the Rights of the Child, for instance, has received judicial notice in a number of cases decided by the courts, including the U.S. Supreme Court’s 2005 ruling in Roper v. Simmons that struck down the death penalty for defendants who committed capital crimes when they were under the age of 18.

Sabatino says the ABA plans to seek involvement with the U.N. working group on elder rights. “The ABA brings a lot of skills to the table that other groups don’t necessarily have,” he says. “There’s a great deal of expertise, particularly in the International Law Section and the Center for Human Rights, on the actual mechanics and approach to drafting international instruments, if this moves ahead to that point.”

It’s a worthwhile effort, Boyer says, “but where it gets interesting is specifics. Hopefully, we’ll go to the next step and have something actually proposed that could be adopted by nations and fashioned into legislation, rather than just a statement of principles.”