The Future in Black and White 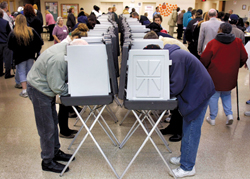 For much of this term, the U.S. Supreme Court spent its time tweaking the law in relatively narrow cases. But in late April, the justices took up several disputes with broader stakes. None looks to be more important than the pair of cases on race and civil rights. Both are legacies of the 1960s and the national commitment to end racial discrimination.

The 1964 Civil Rights Act and the 1965 Voting Rights Act are often cited as the most effective and far-reach­ing laws of the 20th century, matched perhaps only by the Social Security Act of 1935. The civil rights laws sought to make good on the promises offered a century ago during the Reconstruction era. Despite the 15th Amendment and its ban on racial discrimination in voting, most blacks were denied the right to vote in the South until the early 1960s.

County registrars controlled the voter rolls, and they made sure most blacks were not registered.

In Alabama’s Dallas County, where Selma is the seat, only 156 of about 15,000 black adults were registered to vote in the early 1960s. The entire state of Alabama was less segregated, but not by much. Its state legislature was all white, and fewer than one in five blacks was registered statewide.

These figures were cited in an amicus brief filed recently by Alabama Gov. Bob Riley in the case Northwest Austin Municipal Utility District No. 1 v. Holder. Riley’s message was that officials in the South should not be judged today by the deeds of “their Jim Crow ancestors.” He said both blacks and whites register to vote at about the same percentage—73 percent in his state—and one-fourth of the state’s legislators are black, matching the black population of 24.5 percent. “Simply put, Alabama is under new management, chosen by a new electorate,” he said.

He was among the many Southern leaders who ar­gued the Voting Rights Act has done its job and outlived its usefulness. They urged the court to strike down as unneeded the act’s section 5, requiring that any changes in electoral rules or voting districts be approved in advance by the Department of Justice. They said, in es­sence, that the South has been on parole long enough.

During the oral argument April 29, most of the justices seemed to agree that Congress had not justified singling out the South for special supervision for an­other 25 years.

Justice Anthony M. Kennedy said section 5 rests on a “great disparity of treatment” between, say, Georgia, which is covered by the section, and Ohio, which is not. And he said the government had a “very sub­stantial burden” to justify that.

Lawyers defending the statute struggled for evidence to show there are more barriers to voting in the South than elsewhere. Justice Samuel A. Alito Jr. noted that while Latinos register to vote at a lower percentage than Anglos in Texas, the figures are far worse in California, Colorado and New Mexico. “Why didn’t Congress extend section 5 to the entire country?” he asked.

The advocates were also quick to take advantage of last year’s historic election. “The America that has elected Barack Obama as its first African-American pres­ident is far different than when section 5 was enacted in 1965,” said Austin, Texas, lawyer Gregory Coleman in urging the court to void section 5.

Formerly a law clerk to Justice Clarence Thomas and a Texas state solicitor general, Coleman had an unusual client: the Northwest Austin Municipal Utility District. This water district does not register voters. Nor has it a history of voting rights battles or racial discrimination.

But the community elects members to its water board, and if the polling place moves from a private home to a nearby school, the change must be pre-cleared in Washington. This illustrates the absurdity of the law, Cole­man said: A simple change in polling place requires federal approval. In 2006, shortly after Congress extended the Voting Rights Act for another 25 years, Coleman filed a suit to challenge it.

Civil rights leaders, the Obama administration and members of Con­gress defend the law. They say the Voting Rights Act and section 5 remain vital to protect against subtle changes in election districts across the South that can deprive blacks of their fair share of po­litical power. They also say it would require an extraordinary act of judicial second-guessing for the Supreme Court to strike down as unnecessary a law that won unanimous approval in the normally divided Senate and was signed by President George W. Bush.

Also defending the law was the Amer­ican Bar Association. In its amicus brief, the ABA said that “difficult- to-remedy unconstitutional discrimina­tion persists in the election process, and that section 5’s work accordingly is not complete.

“Without section 5,” the ABA brief continues, “the dedicated lawyers who seek to vindicate voting rights in this nation would face an even more difficult time when challenging discrim­inatory practices.”

Perhaps the most eye-opening amicus in defense of the law came from Columbia Law School professor Nathaniel Persily. He directly challenged the notion that Obama’s election signaled a sea change in racial attitudes, at least in the South.

Still, Roberts is no fan of old approaches to civil rights enforcement. He said it is a “sordid business, this divvying us up by race” in a 2006 Texas voting rights case, League of United Latin American Citi­zens v. Perry. And in Parents Involved in Community Schools v. Seattle School District No. 1 in 2007, he wrote, “The way to stop discrimination on the basis of race is to stop discriminating on the basis of race.” The case struck down a voluntary integration plan.

That same sentiment was on display when the court heard a case involving white firefighters and their racial discrimination claim against the city of New Haven, Conn. About 100 firefighters took a test seeking a promotion to 15 vacancies in the command ranks of the department. When the city learned the top 15 scorers were white (one was part Latino), it threw out the results.

Frank Ricci and others sued, alleging they were discriminated against in violation of the Civil Rights Act and the 14th Amendment. In its defense, the city pointed to another part of the act that bars employers from using standards and tests that have a disparate impact on minorities.

Roberts questioned this defense during the oral argument April 22: “Isn’t that kind of a blank check to discriminate” against the firefighters who did well on the exam? Surely, the city would not have tossed out the test results if blacks had scored better than whites, he said.

While the Voting Rights Act stands as a symbol of the civil rights movement, a ruling in the case of Ricci v. DeStefano could have even wider practical impact.