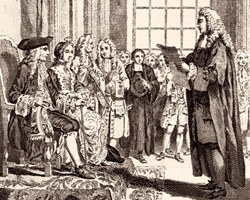 Clerk of the crown reads newly adopted
Bill of Rights to English monarchs.
Photo by Bettman/Corbis

A foreign visitor who came to see the U.S. Supreme Court during the final days of this year’s term might have walked away thinking the U.S. Constitution was written by Englishmen in the 17th century and carried to this country on a sailing ship.

In the term’s two most momentous decisions—on the reach of habeas corpus and on the meaning of the Second Amend­ment—the justices delved deeply into English history, determined to show how those legal concepts were originally understood.

Speaking from the bench, as well as in their written opinions, they quoted English precedents and writings from the time. History proved an uncertain guide, however. While all the justices said they relied on the original understanding, they split 5-4 in both cases on how to interpret it.

THE REACH OF HABEAS

In the habeas corpus case, Boumediene v. Bush, Justice Anthony M. Kennedy cited English cases involving Spanish sailors and African slaves who sought their freedom through a writ of habeas corpus. This suggests the right to habeas corpus was not limited to English subjects or to the sovereign territory of England.

Kennedy said the “privilege of the writ of habeas corpus” was one of the fundamental protections for liberty written into the Constitution. And since Congress had not suspended it, he said it extended to the prisoners who have been held as long as six years at the U.S. Navy base at Guantanamo Bay.

In dissent, Justice Antonin Scalia said there were no early English cases showing that the right to habeas corpus extended beyond the sovereign territory of the crown, and it certainly did not extend to prisoners who were captured and held by soldiers.

In the Second Amendment case, District of Columbia v. Heller, Scalia devoted most of his 64-page opinion to the origins of the right to keep and bear arms. He talked of the Stuart kings and how they used their militias to confiscate the weapons of the populace. That experience, in turn, led to the Glorious Rev­olution and the adoption of the English Bill of Rights in 1689.

“By the time of the founding [of this country], the right to have arms had become fundamental for En­glish subjects,” Scalia said. The Second Amend­ment protected “the inherent right to self-defense,” he said, and that means it is unconstitutional for the District of Columbia to forbid homeowners from keeping a handgun.

Dissenting, Justice John Paul Stevens said Scalia’s history was flat wrong, and his opinion ignored the text of the Second Amendment. Its intent was to preserve “a well-regulated militia” in each state; it did not extend to firearms for personal use, he said.

Northwestern University law professor Steven Calabresi has insisted the court should rely on history as well as text in deciding constitutional issues.

“Originalism does not resolve all the issues conclusively, but it does narrow the range of disputable issues,” says Calabresi, a former Scalia clerk and a co-founder of the conservative Federalist Society.

The court left much unde­cided about the scope of the constitutional right to keep a gun. “The big question is: Is this like the First Amendment and the freedom of speech?” says John Eastman, dean of Chapman University School of Law. The First Amendment prevents government from requiring authors or publishers to register and obtain a license before publishing. If the Second Amend­ment right to a gun is akin to the First Amendment right to free speech, National Rifle Association lawyers could claim that licensing and registration laws for firearms are unconstitutional.

Justice Stephen G. Breyer said in dissent that the decision “throws into doubt the constitutionality of gun laws throughout the nation.”

Scalia tried to allay this concern. The right to self-defense is “not a right to keep and carry any weapons whatsoever in any manner whatsoever for whatever purpose,” he said. Felons and the mentally ill may be denied guns, he said, and weapons may be prohibited in “sensitive places such as schools and government buildings.”

A threshold question remains unresolved. The court’s decision did not extend the Second Amend­ment to states and cities. Since the District of Columbia is not a state, the court had no need to decide whether the Second Amendment was incorporated to the states by the 14th Amendment, as they have done with other amendments in the Bill of Rights.

But the answer should not be long in coming, since NRA lawyers quickly filed suits to challenge handgun bans in San Francisco and in Chicago and its suburbs.

“That’s the next case to come up, but I think it’s a foregone conclusion” the Second Amendment will be extended to states and cities, says Washington lawyer Alan Morrison, who worked on D.C.’s appeal in Heller before he left after a reported disagreement with the city government. “The bottom line is this looks like a full-employment decision for lots of gun lawyers and state, federal and municipal lawyers—but not including me.”

There were other notable developments coming toward the end of this past term. In something of a surprise, employees won nearly all the job discrimination cases. In Meacham v. Knolls Atomic Power, the court bolstered the rights of older workers, ruling employers bear the burden of proving they relied on “reasonable factors other than age” if layoffs disproportionately affect employees who are over age 40.

In Gomez-Perez v. Potter, federal employees, like those in the private sector, were told that they could sue if they were demoted or otherwise retaliated against after complaining of discrimination.

The court strengthened the law against racial bias in the workplace in CBOCS West Inc. v. Humphries. The court cleared the way for a black assistant manager of a Cracker Barrel restaurant near Chicago to sue for retaliation. Hedrick Humphries alleged he was fired after complaining of the mistreatment of other black employees. The restaurant chain argued the suit should be tossed out because the Civil Rights Act of 1866 made no mention of “retaliation.”

But business also had its share of wins. In Exxon Shipping Co. v. Baker, the justices moved again to rein in punitive damages. Justice David H. Souter agreed Exxon was guilty of reckless conduct for permitting a known alcoholic to pilot a supertanker in treacherous waters. But the 1989 oil spill in Alaska’s Prince William Sound was an accident, he said, not a malicious or deliberate act. The 5-3 majority ruled punitive damages in maritime cases should be limited to the actual economic losses. That translated to a punitive award of $507 million, about one-tenth of the jury’s verdict more than a decade ago.

Justice Samuel A. Alito Jr., an Exxon stockholder, sat out the case. His absence may have cost the company dearly. The court said it split 4-4 on whether a shipper can be held liable for the wrongful acts of its captain. Had Alito participated, the court might well have overturned the punitive damages entirely.

Criminal defense lawyers also won two important rulings—one that attracted much notice and one that may well be well heard from in the future. In Kennedy v. Louisiana, a 5-4 decision barred the death penalty for the rape of a child. The court’s opinion drew a line that had been implied but not clearly stated before. Capital punishment must be reserved for murder, the court said, except in cases of crimes against the state, such as treason or espionage.

In the less-noticed ruling, the court in Giles v. Cal­ifornia extended the Sixth Amendment’s confrontation right to those who are on trial for killing the witness against them. This may be one of the sleeper decisions of the term. The 6-3 decision overturned the murder conviction of a Los Angeles man who shot and killed his girlfriend. Dwayne Giles claimed he acted in self-defense, but prosecutors had put on the witness stand a police officer who said he had spoken to Brenda Avie three weeks before, and she said Giles was threatening to kill her.

Scalia said the police officer’s statement must be excluded because this testimony violated Giles’ right under the Sixth Amendment to confront the witnesses against him. Such out-of-court statements may not be used in a trial, Scalia said, unless prosecutors show the defendant killed the witness in order to prevent her testimony.

Experts in domestic violence fear the ruling will make it very hard to prosecute cases where a spouse or partner is found dead and the strongest evidence of murder is contained in the victim’s earlier reports to the police.