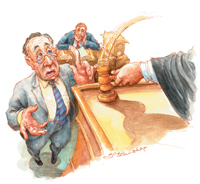 Walking to the federal courthouse, Maria Archuleta was dreading the up­coming discovery conference. She was sure she was seriously in over her head. Maria is a sole practitioner who only recently opened her own business litigation office after working for less than two years with a small general practice firm.

Then, just six weeks after starting her own practice, she found herself up against Strickland, Michaelman & Fox—seven breakaway firebrands who left the hardball firm Windstrom & Crusher because it wasn’t aggressive enough to suit them.

Still, she thought, the case itself is actually simple. Archuleta Camping Gear developed a new water bottle for hiking and camping that kept hot liquids hot and cold liquids cold by using an exciting new polymer instead of ordinary bulky insulation.

Sales were remarkable. But one competitor that was left in the dust, Hike-n-Sip, claimed that Archuleta Camping Gear was guilty of product disparagement of their hiking bottles in its advertisements.

The presidents of the two companies were about to settle the disagreement on their own when Strickland, Michaelman & Fox heard about the dispute in time to offer its services to Hike-n-Sip, which hired the firm to file its case in federal district court.

Needing someone to defend the suit, Orlando Arch­uleta, the president of Camping Gear, figured his niece, Maria, could handle the pretrial preparation. Besides, she needed the work.

And it went smoothly at first, until the state supreme court suddenly changed the law and took away the possibility of punitive damages in product disparagement cases—a key part of Hike-n-Sip’s case.

But instead of ratcheting down their preparation and moving the case to trial more quickly, Strickland, Michaelman & Fox decided to make discovery long, hard and expensive for Maria Archuleta and her uncle’s company to push them into wanting to settle.

And that’s the problem, thought Maria on her way to court. Aren’t things bad enough already? After two months of backbreaking extra work since the change in the rules, why does Judge Standwell suddenly have to call a supplementary discovery conference? What new things am I going to have to do now and how will I possibly be able to do them?

STICKING TO THE PLAN

Meanwhile, the three name partners in Strickland, Michaelman & Fox were looking forward to the conference with Judge Standwell.

“It’s working,” Wiley Fox said to Joyce Michaelman. “Just like you said it would. ‘Make discovery so painful, they’ll want to settle.’ ”

“And we’ve managed to be civil to Maria Archuleta,” said William “Tricky” Strickland. “Acting like the good guys while you’re burying your opponent in work takes effort. I’m just surprised she hasn’t hit us with an offer to settle.”

“That’s because she’s not really in charge,” said Joyce. “This is her uncle’s case, not hers. She’s just a 27-year-old kid. She can’t pressure her uncle into settling. She wouldn’t even try.”

“Right,” said Wiley. “We want Uncle Orlando to feel the pain in his wallet.”

“That’s why I’m glad Standwell has called this discovery conference,” said Tricky. “The judge’s added pressure and the increased cost of discovery are going to push Uncle Orlando into buying the case. People like him would rather sell plastic water bottles than take the risk of a trial.”

While all this was going on, Judge Horatio Standwell was in his fifth-floor courthouse office, running through how the discovery conference was going to play out.

At first Judge Standwell had been worried that Maria wouldn’t be able to handle any kind of case against the “Scorched-Earth Seven”—which is what the local judges call Strickland, Michaelman & Fox. But from the very beginning, when they were being their usual vicious selves, Maria dealt with them very professionally.

Then a few months later, when the supreme court took away the right to punitive damages in product disparagement cases, Judge Standwell noticed that the Scorched-Earth Seven had started being civil to Maria.

Standwell was tempted to take Maria aside and tell her that when people you don’t trust suddenly start acting like they’re your friends, you should put your hand on your wallet. But when he overheard Maria tell Jamie Gomez, “That firm would steal a bone from a starving dog,” he realized she could take care of herself.

Focusing on the discovery conference, Judge Stand­well knew what ruling he wanted to make, but he wasn’t sure he could set it up the way he wanted.

He knew Strickland, Michaelman & Fox had radically increased the amount of discovery in a small case that had suddenly gotten even smaller. And it was obvious why they had done it—to force the defendant into settling the case instead of going to trial.

The problem was, would the record satisfy the court of appeals?

Then Standwell actually chuckled out loud as he thought of how his only proof of why the Scorched-Earth Seven had pushed up the cost of discovery was some outrageously inadmissible hearsay evidence.

The judge’s secretary, Karen Martinez, was told by her friend, “the Mole” (who works at the Strickland firm) that he heard the lawyers plotting how to make discovery outrageously expensive for the defense in the Hike-n-Sip case.

Not a source he could put in the memo supporting his order, Standwell thought.

Then he said to himself, “Horatio, don’t worry. These folks don’t understand that what they’ve done is improper. Lots of lawyers drive up the cost of discovery to force settlement. These people won’t try to hide it. It’s a normal part of their game.”

When the conference started that afternoon, everybody was there—the three lawyers from Strickland, Michaelman & Fox for the plaintiff, Maria Archuleta for the defendant, Judge Standwell and his law clerk. As usual, everything was being recorded.

Judge Standwell said, “The state supreme court has simplified our jobs by taking punitive damages out of the case, although that can’t have made the plaintiff any happier.

“Mr. Strickland, has the court’s ruling helped move the case along?”

“Not really, your honor,” said Strickland. “While it looks simple, this is basically a defamation case. Liabili­ty is straightforward. It’s right there in the defendant’s advertisements which held up our products in a false light. The difficult part of the case is the complexity of proving damages.

“But while we have held ourselves out as being willing to reach a fair and reasonable settlement, the defense is unwilling to talk compromise in any way.”

“Yes, your honor,” said Maria. “Archuleta Camping Gear does not feel it would be proper to pay for a wrong it hasn’t committed.”

“Well, Mr. Strickland, is there anything you can do to help move this case along, or are we going to be forced to muddle our way to trial?” said Judge Standwell.

“Just keep on doing what we’ve been doing, judge,” said Tricky. “Continue to escalate our discovery demands until the defendant understands that it makes more sense to reach a reasonable settlement.”

“Ms. Michaelman, would you like to add anything to that?”

“Just that I agree with co-counsel completely, your honor,” she said.

Judge Standwell handed everyone a copy of Rule 11 of the Federal Rules of Civil Procedure. “Look at Rule 11(b)(1) with me,” he said. “It says that by filing a pleading, motion or other paper, a party is certifying it is ‘not being presented for any improper purpose, such as to harass, cause unnecessary delay, or needlessly increase the cost of litigation.’

“And Federal Deposit Insurance Corp. v. Maxxam—the cite is 523 F.3d 566 (2008)—says it is improper to use ‘excessive discovery for the purpose of increasing the costs of defense.’

“Based on what plaintiff’s counsel just said, that’s exactly what they were doing. That’s improper,” said Standwell. “We’re going to spend the next few hours looking at the plaintiff’s discovery requests to determine to what extent the purpose behind each one was coercive and whether it calls for judicial sanction.”

Everyone looked stunned. It was the last thing any of them expected.

Jim McElhaney is the Baker and Hostetler Distinguished Scholar in Trial Practice at Case Western Reserve University School of Law in Cleveland and the Joseph C. Hutcheson Distinguished Lecturer in Trial Advocacy at South Texas College of Law in Houston. He is a senior editor and columnist for Litigation, the journal of the ABA Section of Litigation.