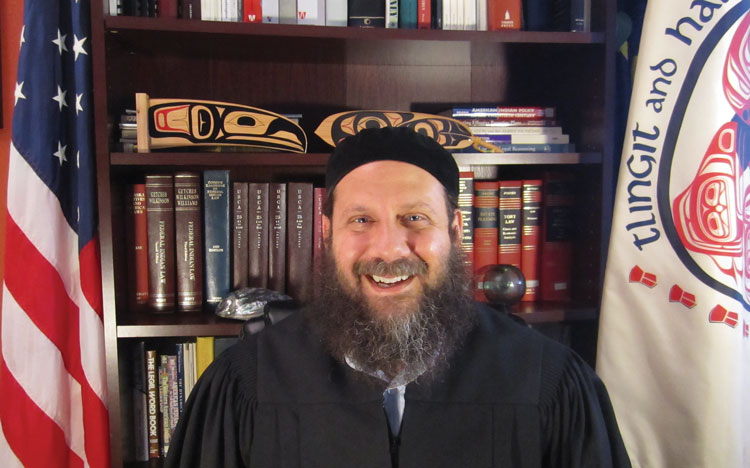 How does a Jewish kid from Philly become a tribal court judge in Alaska? Just ask Judge David Avraham Voluck. Born and raised in Philadelphia, Voluck has been practicing federal Indian and tribal law from his home base in Sitka, Alaska, since 1996, save for a two-year sabbatical he took to attend the Rabbinical College of America.

He presides in the Sitka Tribal Court (primarily Tlingit and Haida Indians) and the St. Paul Island Tribal Court (primarily Unangan Aleuts), and is organizing an intertribal court for the Kodiak archipelago villages. He co-authored two editions of Alaska Natives and American Laws and is faculty for the National Judicial College’s National Tribal Judicial Center and the National Tribal Trial College housed at the University of Wisconsin Law School.

OK, how did you end up becoming a tribal court judge in Alaska?

Because I wanted to save the world! I was always very attracted to nature and the environment, so I went to Lewis & Clark Law School, which was the top-rated school at the time. I studied environmental and natural resources law, but I wasn’t connecting with it. I was encouraged by a friend to do an internship with a tribe in Sitka, and I met indigenous people who lived in nature and relied on the environment for their life, their culture and their well-being. It added a spiritual piece and a human piece, and I was smitten. The Sitka people were kind enough to offer me a job, and I accepted.

Was it hard to get used to the cold?

Actually, the day-to-day in Sitka is very warm. We’re located in a temperate rain forest—there’s a gulf stream current that keeps it between 65 and 45 degrees. We don’t like to tell people that because we lose a lot of sympathy when people realize we don’t live in igloos. The villages where I visit are a different story. Next week, I am going to a place called Noorvik, and the last time I was there, it was minus 40. They picked me up from the airport in a sled.

Why can’t you just conduct your proceedings via Skype or a video link?

I do use Skype when I can, but reliable internet is still a work in progress in rural Alaska.

Tell me about your court. What types of cases do you handle?

We have what’s called a Tribal Healing to Wellness Court. It’s a long-term program for people who are brushing up against the law constantly, not because they’re criminal minds but because they have a substance abuse problem. When you have a substance abuse problem, you’re likely to end up in one of three spots: court, the police station or the morgue. This program is designed to take them through the long process of building life skills and self-esteem. Every now and then, I get to handle contractual disputes or an election challenge. But most of what I do is crafting solutions with sanctions and incentives rather than sentences. It’s about looking for remedies and healing. The more adversarial American system doesn’t work for these communities—it’s not appropriate for the village setting.

How is this type of court authorized under U.S. law?

It’s called inherent sovereignty, and it comes from the tribes’ own organic governmental authority. You can’t violate the U.S. Constitution, but from there, the law is completely up to each tribe. People have to remember, tribes have been solving issues in their villages since time immemorial. They have their justice systems, I am just helping them place it into a more traditional legal vessel so their decisions hold full faith and credit and can be recognized throughout the U.S. justice system. 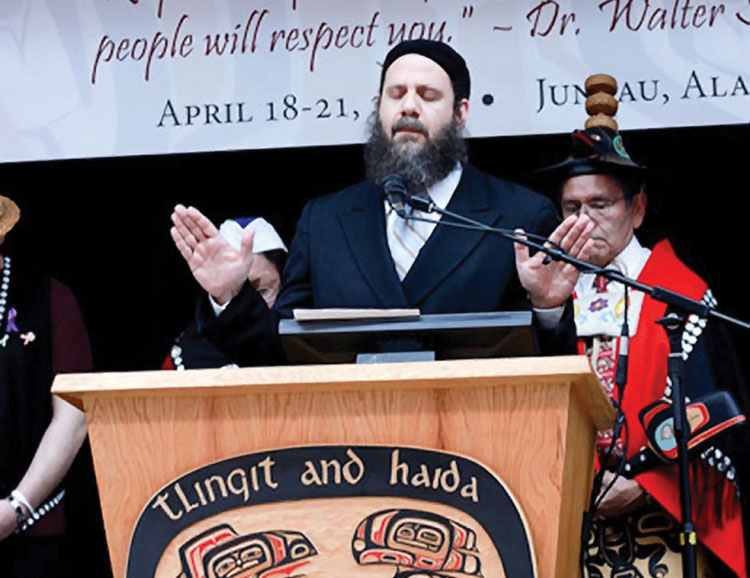 What would you say is your biggest challenge as a tribal court judge?

Forgive me for being philosophical, but I’ve been thinking about this a lot. Alaskan tribes have experienced a huge amount of cultural and family disruption—from relocation and disease to the boarding school movement that took Native children away from their families. All of this happened in a span of 100 years, and anti-social behavior, domestic violence and child protection issues are ripples from this disruption.The Aleuts in St. Paul were literally enslaved by the Russians to hunt seals, then they were basically indentured servants to the Americans until the 1980s. During World War II, the U.S. government interned them in a cannery—they let the men leave to hunt but left the women and children to die from typhus in the cannery. So if I am dealing with anti-social behavior, forgive ’em. They’re rebounding. It’s an interesting parallel between Jewish people and Native people. We’ve had to figure out how to rebound off the mat—like the hardcore mat. It’s about survival strategies that we can share with each other.

Do you think that focusing on your faith helped you to become a better lawyer, as well as a better judge?

A thousand percent. I can’t even begin to describe what studying my identity, my history and the history of genocide brought to my consciousness. When I connected back with indigenous people, we understood each other so much more. I think it gave me a sincerity and a sense of authenticity, and they know I am a trusted cousin and an ally.

How do people react when they first see you on the bench with your head covering, full beard and sidecurls?

I often wonder what people think the first time they meet Judge V, when they walk into the courtroom and there’s a Hasidic Jew sitting there! I haven’t gotten too many double takes, though. It’s kind of weird, but people just settle right in. Alaska is kind of libertarian in a way—they’re not going to tell you how to live your life. I work in small villages where everyone is related and everyone knows every cold you’ve ever had, so sometimes I think it’s a relief for them to see this kind of peculiar guy who doesn’t know what happened to them in third grade. But there also could be some familiarity because I look a bit like a Russian Orthodox priest.

OK, you have to explain …

There’s a significant missionary influence in Alaska, and some of the first missionaries who came here were Russian Orthodox. They have the beard and the black clothes, too. So I think sometimes when people see me, it seems familiar to them. I even had someone confess to me when I was at the grocery store.

Where do you see yourself in five years? Do you have goals you’d like to accomplish?

This article ran in the February-March 2020 issue of the ABA Journal under the headline: “Serving Two Tribes: This Alaska lawyer blends life and law as a tribal court judge and an Orthodox Jew”