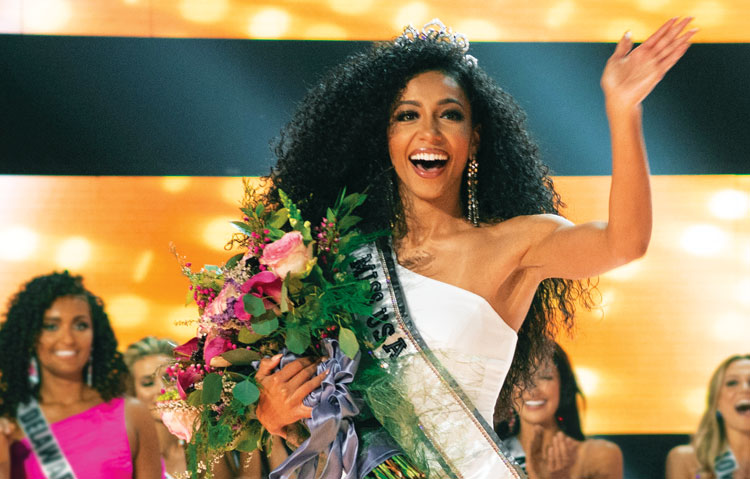 In May, Cheslie Kryst received a verdict from a panel of judges that changed the course of her life. The verdict was much more than a win for Kryst, who practices complex civil litigation as an associate with Poyner Spruill in Charlotte, North Carolina. It carried with it a crown, a reign and the title of Miss USA 2019. For Kryst, it was the realization of a dream she’d held since high school when she entered her first pageant. She’s been on a quest for crowns ever since, competing in pageants in addition to earning her BS from the University of South Carolina and her MBA and JD from Wake Forest University. She competed while clerking for her firm as a summer associate, interning at General Motors Co., launching a fashion blog and working on cases pro bono to reduce prison sentences for nonviolent offenders. After winning the Miss USA title, Kryst took a leave of absence from her firm and moved to New York City, the pageant’s home base, to fulfill the duties of her yearlong position and simultaneously prep for the ultimate trial: the Miss Universe pageant.

Congratulations on becoming Miss USA! What is your life like now? Is there ever a typical day for you?

No—my schedule is always changing. There’s a lot that pops up without a lot of notice. Last week, I was back in North Carolina, where I spoke briefly on the floor of the General Assembly. I met with the chief justice of the North Carolina Supreme Court and got the key to the city of High Point. The week before, I was in Boston at the Best Buddies Challenge benefit, where I got to play flag football with Tom Brady.

It sounds amazing. Do you think more lawyers and aspiring lawyers could benefit from the pageant system?

I can’t say enough about the skills you gain competing in pageants. I have to compete with interviews and on-stage questions, and I work with coaches to practice how to deliver my message in three minutes while being concise, understandable and persuasive. I think anyone can benefit from that training, even if they never win.

You got involved in pageants in high school, and now you’re 28. What inspired you to keep competing all these years?

I am the oldest Miss USA ever, which is a title I wear very proudly! A lot of my drive comes from not winning. I competed three times before I ever won a local title, and there were a lot of losses before I got to the state competition for Miss North Carolina. It can be difficult when you don’t win—people know you’re competing and they’re excited for you, and your friends and family are buying the tickets and booking hotel rooms. But my goal was more important than that stress. I wanted to win, and I knew that if I didn’t compete, I wouldn’t win.

Let’s talk about the swimsuit competition. Was that ever an issue for you?

My dad is a bodybuilder, and my mom competed in pageants. I’d seen my mom and dad compete in swimsuits, so it was never an issue.

I forgot about those tiny swimsuits that men wear in bodybuilding competitions.

I don’t remember very many people asking Arnold Schwarzenegger if competing in a Speedo objectified him. Men never get asked that question, and women always do. When I grew up, I always knew I wanted to do pageants, and the fact that society had a double standard for women wasn’t going to dissuade me from doing something I wanted to do. One of my goals was to help women know that wearing a swimsuit doesn’t make you shallow or unintelligent; it shows there are different sides of you.

Speaking of suits, is it true that when you were a law student competing in a trial advocacy competition—which your team won, by the way—a judge said you should wear a skirt instead of pants because judges prefer skirts?

Yes. The male competitors received substantive feedback, and I got feedback about my clothing. It blew my mind.

When I was in law school, a judge in a moot court competition told me that I should bring a box with me to court to stand on so I would look taller. Isn’t that crazy? Do you think he would have given that same advice to a guy?

It’s like, are they so caught off guard that you’re not a man that that’s all they can think to say? Come on, people—women are lawyers, too, and I am sure you can think of things to critique them on other than the way they look. Society allows men to be unique individuals with unique experiences, and women have to conform to standards of what society thinks a businesswoman looks like. But I think society is slowly but surely graduating out of that mindset.

That’s a great segue to discuss your fashion blog, White Collar Glam, which showcases professional clothing for women. What inspired you to start it, and where do the clothes come from?

When I was in law school transitioning to becoming a lawyer, it was difficult for me to find professional clothing that fit and was affordable. As I navigated the workplace and learned from my experiences, I shared that on my blog. All the clothes in the photos are things I already have in my wardrobe. I wanted it to be realistic, and I wanted people to know it’s OK to have a favorite outfit and to be seen in it more than once.

Is it true that one of your clients is Miss America?

Yes! Miss America Nia Franklin and I met in 2016 when she was competing in the Miss Metrolina pageant where I was crowning my successor. We maintained our friendship over the years, and when she won the Miss America 2019 title, she needed someone to help her review the tons of documents she received after she won. It was really cool to be able to work for a friend, and how many people can say they’ve worked for Miss America!

I know you’ve still got the Miss Universe competition coming up, but what’s next for you when this is all over?

My firm is keeping my office open, and I plan to return. Being an attorney is something I have dreamed of since I was a little kid, and it’s not something I plan to walk away from. I plan to keep writing for my blog and maybe develop a clothing line. Thanks to the Miss USA pageant, the possibilities are endless!

This article first appeared in the September-October2019 issue of the ABA Journal under the headline “Career Win: “This North Carolina litigator reigns as Miss USA.”