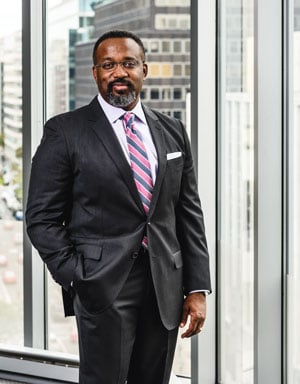 When clients approached Marc Lindsey in 2008 about a request from the American Registry for Internet Numbers to voluntarily give back unused IP addresses, he researched the issue. Then he advised his clients to hang on to them. That simple piece of advice saved clients a valuable asset and brought Lindsey into a lucrative niche market.

“When the market appeared to be taking shape, we went back and proactively reached out to our clients early on to inform them that there’s an opportunity to sell,” says Lindsey, president and co-founder of Avenue4, a company specializing in buying and selling Internet Protocol addresses.

“I advised them to keep their IP addresses when transferring assets and to exclude—or include for value—their IP addresses in cor-porate mergers, acquisitions and divestitures,” he says. “By doing that early on for some of the largest block holders, the word spread that I was one of a few lawyers knowledgeable in this area.”

It’s these business instincts that keep Lindsey successful. The Washington, D.C.-based lawyer is the leading expert in the niche world of buying and selling IP addresses.

Lindsey estimates there are 800 million to 1 billion unused addresses in the Internet Protocol version 4 format available in the secondary market (not transferred through the American Registry for Internet Numbers). That creates a market of between $6.4 billion and $10 billion.

Acknowledging difficulties in estimating prices and numbers of transfers, he says that in 2014 ARIN reported secondary-market transfers of just under 14 million IPv4 addresses. That might present a total value of trades in 2014 and 2015 of about $143 million, and “during that same period Avenue4 brokered and closed deals valued at more than $74 million.”

“We want to connect with other entrepreneurs and foster innovation,” Lindsey says. “It’s important to have diversity within the practice of law.”

Lindsey is not your typical legal entrepreneur. He began his career as a systems engineer working for GE Aerospace. Through his work, he became interested in IP contracting.

“Working at GE gave me a different mindset,” says Lindsey. “I wanted to help small businesses in licensing their technology.”

After graduating from the University of North Carolina School of Law in 1996, he worked at Hunton & Williams before joining Levine Blaszak Block & Boothby. As a partner in the firm’s technology law practice group, he has focused on software licensing deals. Lindsey advised on a deal to sell Nortel’s remaining IP addresses to Microsoft in 2011. Three years later, he and his partner, Janine Goodman, launched Avenue4.

“Some of my legal clients told me they liked what I was doing for them and asked me to find buyers for them,” Lindsey says. “They trusted me to do the whole set of services in this nascent market and preferred hiring me for the bundle rather than hiring a startup broker that they hadn’t worked with before.”

Lindsey notes that “the brokerage business is very competitive. New entrants arrive frequently, and experienced brokers are trying to land many of the same buyers and sellers, all while the market rapidly evolves and the norms for cooperation between brokers remain in flux.

“Avenue4’s continued success will require us to work hard to extend our reach beyond the large buyers and sellers, who form the basis of our existing business, to serve the market more generally and influence it towards greater maturity,” he says.

Behind the scenes of the Internet is a billion-dollar industry. Many website addresses are routed through networks using the 32-bit-number Internet Protocol version 4. Nearly 4.3 billion IPv4 addresses exist. Due to the growth of the Internet, these addresses have become a valued commodity.

“The IPv4 market is surely growing,” says Ben Edelman, an associate professor at the Harvard Business School. “It was only this summer that ARIN became unable to satisfy requests from North American networks needing additional IPv4 addresses. Until this time, most networks could simply ask ARIN for more addresses, and ARIN would provide them at a low cost, eliminating any need to buy on a market. Now networks have to buy on the market if they need IPv4 addresses.”

To keep up with demand, companies have two options—use the market or switch to Internet Protocol version 6, a new numbering system that will replace IPv4. Companies face a difficult decision given that websites cannot operate under the two protocols at the same time.

“Many tech experts have already set it up, and some networks are already using IPv6, especially in other countries and especially for mobile phones,” Edelman says. “But for many years, conceivably a decade or even longer, websites and online services will need to support IPv4.”

Companies will need to carefully manage their IP addresses before IPv6 adoption. Lindsey works with Fortune 100 companies, some of which have millions of unused IP addresses, and he expects market demand to go up.

In the meantime, Lindsey is looking for the next challenge.

“I’m looking for the next disruptive technology,” he says. “I want to be there, anticipating industry-shaping changes, so I can help my clients balance rights, responsibilities, risks and rewards as they embrace emerging technologies.”

This article originally appeared in the November 2015 issue of the ABA Journal with this headline: “Address Advantage: Trading in IP numbers becomes a lucrative market.”

Print and initial online versions of “Address Advantage,” November, said Marc Lindsey “brokered a deal to sell Nortel’s remaining IP addresses.” Though Lindsey was an adviser on the sale, he was not the official broker of it.