Uber-ads: Always on the lookout for effective ways to advertise, lawyers are turning to ride-share vehicles 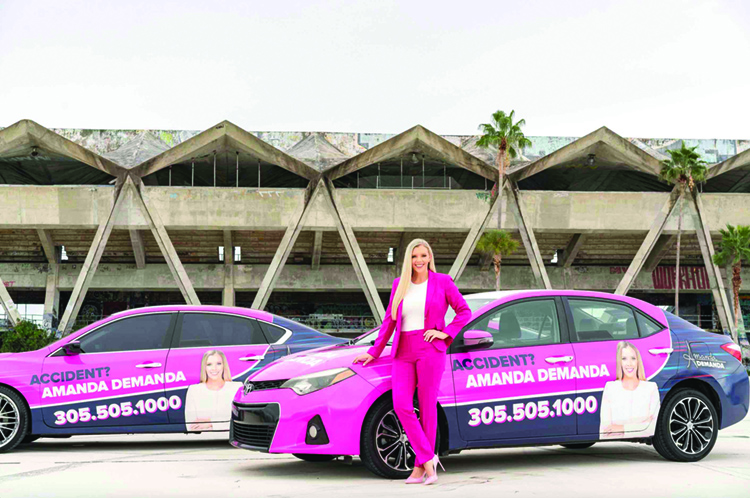 Amid the cars circling around TD Garden ahead of a Boston Bruins playoff game in 2021 were several displaying the face of personal injury attorney Larry Nussbaum and his firm’s contact information. Nussbaum also planted himself outside the arena as thousands streamed into the game, and he says when passersby noticed his likeness on the ride-share vehicles, they treated him as a mini-celebrity.

The promotional initiative is one example of how his firm has partnered with Carvertise, a national ride-share-based transit advertising company, to boost its visibility among potential new clients and prior clients in a competitive marketplace.

“People are seeing me all over, it brings me to the top of their mind, and it reintroduces myself to some of my past and current clients,” says Nussbaum, managing partner of Nussbaum Shunnarah Trial Attorneys.

Nussbaum’s firm is among a growing number of law firms that are using Carvertise’s fleet of ride-share vehicles for advertising rather than relying solely on more traditional marketing methods such as billboards, buses or taxis. Carvertise now has at least 45 law firm clients, up from five at the start of 2020, according to company officials. Most of the firms are focused on personal injury law, they say.

Mac Macleod, the company’s CEO and co-founder, says he thinks his company is gaining traction in legal because it’s providing a new and more effective way of advertising. For example, firms can have Carvertise send Uber, Lyft, DoorDash or Grubhub vehicles with their marketing messages on them to specific locations such as hospitals or construction sites. Carvertise is able to do this by coordinating directly with drivers who sign up on its website to take part in the company’s campaigns for clients.

So-called swarms are when the company has multiple cars bearing a firm’s marketing message sent to gatherings of large crowds, such as concerts or sporting events. Furthermore, Carvertise uses technology to send digital ads to consumers who its cars drive past, and drivers can hand out marketing material to riders who ask about the law firm advertisements on the cars. “There’s unique capabilities here that other mediums don’t have,” Macleod says.

Macleod notes that another reason he thinks Carvertise is making inroads with law firms is because ride-share vehicles are a more memorable form of marketing than other more traditional options. According to Nielsen’s 2019 Out-of-Home Advertising Study, roughly 64% of U.S. residents 16 and older who were surveyed recalled seeing a wrapped vehicle ad in the past month. This figure compares favorably to the 55% who recalled seeing an ad on a public bus and 31% who noticed one on a taxi. Meanwhile, 81% remembered seeing a billboard of any kind in the prior month, but just 27% recalled seeing a mobile billboard in that time period.

Miami-based personal injury attorney Amanda Demanda says since she started using Carvertise last year, she has frequently heard from people in the community who have seen ride-share cars with her image on them. For example, opposing counsel on a case let her know his Uber Eats delivery driver came in one of her wrapped vehicles. Demanda says she appreciates the ability to have the ride-share vehicles sent to specific events, such as a Love Your Lawyer Day promotion her firm hosted at a Cuban cafe in early November.

“Given all the aspects they bring to the table, they are definitely a lot more competitive than the buses or the billboards here in Miami,” Demanda says of Carvertise.

Other metropolitan markets where law firms are using Carvertise include Dallas, Houston, Los Angeles and San Francisco. But firms in less-populated markets such as Las Cruces, New Mexico, and Jackson, Mississippi, have used the company for marketing assistance as well. In communities where there are fewer Uber and Lyft drivers, Carvertise can tap everyday cars to promote clients’ marketing messages.

“In smaller markets, what we’re able to provide is exposure in key areas that they otherwise don’t have the opportunity to reach,” says Daione Sanders, Carvertise’s director of sales. “In major markets, we are used to differentiate from competitors who have oversaturated TV, radio, billboards, buses, etc.”

Many firms also have turned to social media to amplify the impact of their Carvertise campaigns. Demanda’s and Nussbaum’s firms are among those that do various giveaways for consumers who see their cars and tag them using platforms such as Instagram and Facebook. They both say that given the very competitive nature of personal injury law and large advertising budgets firms in their practice area often have, they need to embrace new ways of advertising to stay top of mind for consumers.

“The thing that I liked about Carvertise is nobody was doing it yet in my market,” says Nussbaum, referring to Massachusetts.

“Personal injury attorneys are nothing if not innovative,” Ligos says. “They’ll try everything. If you can show them that you can produce, and it can work, they’ll just keep coming back to it.”

Macleod says the company has started attending legal conferences to grow its connections in the industry. He envisions the company’s market share in legal will continue to increase in the years to come.

“I think the rate of expansion in the industry is going to stay very, very high for at least another two or three years until 80% of the legal industry knows that this is an option,” Macleod says.