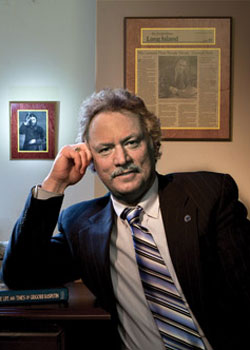 As an independent investigative lawyer often charged with tracking down missing persons, Charles Eric Gordon seeks inspiration wherever he can find it. Sometimes that means turning to the early 20th century Russian mystic Grigori Rasputin.

“The man was so intuitive,” says Gordon, 58, who can recite from memory the intricacies of Rasputin’s influences on people such as Czar Nicholas II. “Starets,” he will intone from time to time, using the Russian Orthodox term for a spiritual leader, “what am I missing here?”

Whether this ritual works is open to interpretation. But Gordon, whose career has included stints tracking down evasive witnesses and helping the New York City Police Department run wiretaps, maintains he has benefited from the practice.

Rasputin’s picture hangs on Gordon’s office wall, and the solo also collects books about him. “It seems to help me channel, to focus—especially where intuition is necessary,” says Gordon, who is sometimes mesmerized by aspects of Rasputin’s photographs, including the appearance of his eyes or the gesture of a hand.

The New York City lawyer is not the least bit self-conscious about his Rasputin preoccupation. He welcomes questions from visitors, including fellow attorneys and local judges. “For every one or two that say ‘ha, ha,’ there are six or seven that get it.”

Lest you’re one of the doubters, there appear to be quite a few among the ranks of rationally minded lawyers who take at least some workplace inspiration from seemingly nonrational sources.

Maintaining rituals that cross into the business realm may in fact be more common than not, especially when the economy gets rough, says Northwestern University professor Adam Galinsky, who has studied decision-making in business. “Research shows superstitions are an activity we engage in to feel more in control of our environment. Rituals are a buffering mechanism.”

It is likely that adherence to such behaviors has increased during the recent recession. During the Great Depression and even the 1960s, a time of social unrest, interest in such practices grew, Galinsky says.

Family law practitioner Kristy Gosteli Helm, 45, has long been influenced by numerology and astrology, often gauging the tenor of her day—including her approach to court appearances—by the charts.

If indications point toward high levels of emotional sensitivity, the Salem, Ill., solo is sure to keep her behavior in check. “I really, really pay attention,” says Helm, who was 8 when she first got her hands on a deck of tarot cards. “I really make sure I stay open to the fact that, wow, I could really go off the head today.”

Others, including Hauppauge, N.Y., solo Jeena Belil, may have workplace superstitions but say they resonate on a purely sentimental level. Belil keeps a sterling silver and wood statuette of St. Dionysius Areopagite—a gift from a friend—on a shelf in her office. The icon, according to Belil, is supposed to bring luck to attorneys.

“I’ve moved a couple of times, and he always takes his rightful place in my home office,” she says.