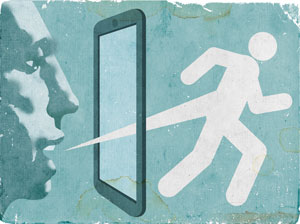 For many years, one lawyer and his or her secretary made a team. Over the years, one administrative assistant working for several or even many lawyers has become the norm, especially in larger firms. Are we now arriving at a time when lawyers will move back to a one-to-one relationship, at least for certain tasks, but with digital assistants named Siri, Cortana or Alexa?

By digital assistant, I mean a software program or service that responds to voice commands to answer questions and accomplish basic helpful tasks we traditionally relied on humans to do. Examples might be reminders, simple scheduling and directions.

I’m not talking about actually replacing everything a human can do. I’m suggesting there might be ways that digital assistants can help a lawyer who is vying for an assistant’s time with other lawyers.

For instance: I wanted to set aside an hour of uninterrupted time to write this article. In the past, I might have said, “Pat, would you keep anyone from interrupting me for the next hour so I can work on an article?” Pat would then take phone messages and do other things to keep people from interrupting until coming in and saying, “Your hour is up.”

Today, I turned to my Amazon Echo device and said, “Alexa, set a timer for 60 minutes.” The burden is on me not to answer my phone and to avoid other distractions, but I know Alexa will sound a gentle alarm at the end of 60 minutes.

In either approach, I get the result I want—60 minutes of productive writing time.

I use Alexa as my example because “she” is now guarding my writing time, but the other digital assistants—Apple’s Siri, Google Now and Microsoft’s Cortana being the best known—will do many, if not all, of the same things.

Consider for a moment what you use and have used human assistants for and how that has changed over the years. My list includes reminders of all kinds, simple fact questions, directions to appointments, when to leave to get to an appointment, weather and traffic updates, sending simple messages—so many other simple tasks that I have started to wonder how much fun it really was to work for me. What I’d like to have done is keep giving my human assistants higher-level work so they can grow and make the best use of their skills.

The last point is where I see that lawyers can take advantage of digital assistants. Let computers do the work that computers are best at and will never complain about doing. I have a long list of things I use a digital assistant for: adding items to to-do lists, checking time zones around the world, conversions such as Fahrenheit to Celsius, weather forecasts in different locations, simple fact questions, dictating emails and text messages.

Digital assistants such as Siri and Google Now are available on smartphones and smartwatches, which means you can use them wherever you are. The Amazon Echo also doubles as a great Bluetooth speaker and music system, even though it’s not portable. Putting a $179 Amazon Echo on a lawyer’s desk—especially in firms and organizations looking to increase the lawyer-to-assistant ratio or reduce staff—may ease the pain and enable human assistants to do higher-level work.

Digital assistants have taken us a little bit by surprise. It’s time to do some experimenting and see what all they can do and how they might help you. And thank you, Alexa, for letting me know that my time to work on this article is now up.

This article originally appeared in the April 2016 issue of the ABA Journal with this headline: “Beck and Call: Voice-responsive programs can assist—not replace—human help.”