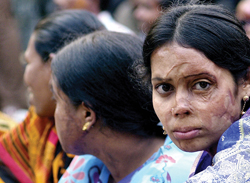 The ABA is launching a new project that will harness the modern power of the Internet to help counter political forces and cultural traditions that support oppression against women in many societies around the world.

The International Models Project on Women’s Rights—dubbed IMPOWR—is a response to the continuing plight that women face in many societies despite decades of efforts to implement national laws recognizing gender rights. The project aims to bolster those rights through international agreements, particularly the Convention on the Elimination of All Forms of Discrimination Against Women. The convention has been ratified by 186 nations (but not the United States) since its adoption in 1979 by the U.N. General Assembly.

Plans call for IMPOWR to create an online database that collects information on gender-related legal issues, laws and reform efforts in countries around the world. The project will include a significant collaborative element that allows experts both “in country” and on the outside to contribute information, and will hold links to resources and other materials that can be accessed by others using the database.

The ABA announced the project launch on March 11. In its initial stage, IMPOWR will operate a prototype online database focusing on conditions facing women in one country—Bangladesh—but eventually its reach will extend to more than 100 countries, says project chair Aileen Pisciotta of Falls Church, Va. Pisciotta is an attorney at Executive Counsel, a firm that provides outsourced general counsel services to businesses. She participated in a task force for the ABA Section of International Law that developed the concept for the project.

In addition to the International Law Section, other co-sponsors for the project are the Section of Real Property, Trust and Estate Law; the Com mission on Women in the Profession; and the Commission on Sexual Orientation and Gender Identity.

Pisciotta emphasized that the project, which is scheduled to be fully operational by the end of 2010, will not be the exclusive province of the ABA. The ability of legal experts, lawyers and women’s advocates from around the world to provide information to the IMPOWR database is a key feature of the project, she says.

Pisciotta notes that oppression of women in various forms is an issue getting much attention these days, but says that IMPOWR should help individuals and organizations working in the field to share ideas in ways that will shed new light on the causes of violence and other acts that deprive women of their rights.

“Law reform is important,” she says. “We have to get the laws right first—that’s the important thing. But it’s not all about the law. We have to go far beyond the adoption, recognition and enforcement of laws. We have to go to cultural attitudes. We have to balance awareness of the law and cultural factors to address issues of violence against women.”

The project’s prototype database, which is gathering information on the epidemic of acid attacks against women in Bangladesh, is a case in point. More than 2,600 such attacks—often causing blindness and disfigurement—have been reported since 1999, according to the Acid Survivors Foundation of Bangladesh. Government efforts to stop the attacks have been fitful. Many acid attacks are domestic acts, but some are aimed at intimidating women and girls from participating more fully in society.

Pisciotta and others involved in IMPOWR say it should provide another vehicle for responding to acid attacks and other forms of gender violence in Bangladesh and other countries. “We cannot let it go on and on,” she says. “There has to be a way to get at this issue.”