Weighing the arguments for and against obfuscation in court 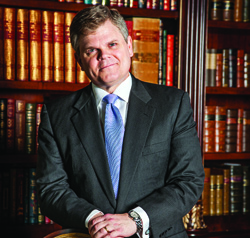 There’s an old legal saw to the effect that if you have a good case, you should clarify things for the judge; if you have a bad case, the best you can hope to do is confuse the judge. Let’s think about what this means.

Speaking in 1923 at the New York City Bar Association, Judge Jacob Marks strikingly phrased the orthodox view: “The clear and accurate expression of well-considered thought is a formidable weapon in legal warfare.” He added: “If the judge sees that a lawyer has worked up his case well, prepared himself from every angle, and that he knows the facts and the law, the lawyer has a friend at court.” Judge Marks wanted thoroughness, he wanted clarity, and he wanted strong English.

That’s what judges always want. These qualities undoubtedly give the lawyer an advantage. Occasionally you may hear some naive person say that the facts should speak for themselves and the eloquence of the lawyer shouldn’t matter. But this view of how things ought to be just doesn’t square with reality. Many an unclear lawyer has lost a strong case. An eloquent lawyer marshals the facts favoring his or her client and presents them forcefully and cogently.

Rhetorical inequality didn’t trouble the great Samuel Johnson, the 18th-century man of letters who issued wise pronouncements on all aspects of human life. Here’s what he said about lawyers: “If by … a better method of communication, [a lawyer] has the advantage of his adversary, it is an advantage to which he is entitled.” That’s always the case. And it can be a sneaky weapon. Often the most eloquent advocate will disclaim rhetoric and eloquence. (Think of Marc Antony in Shakespeare’s Julius Caesar: “I am no orator, as Brutus is, … but a plain, blunt man.”) Watch out when that happens.

Now back to the key question: Is there ever a time to confuse the court? Could a “better method of communication” include obfuscating as a necessity? Let’s ponder.

A classic statement on the point can be found in an 1882 book by the Honorable F.C. Moncreiff: “Advocates may in a certain sense be separated into two classes. There is the advocate who has a sort of instinct for seeing the point upon which each case hinges and who, regardless of all side issues, however inviting, concentrates the whole of his strength upon the essential question. Such is the advocate proper for what is called a good case, and such is the temper of the … good judge.”

But this type of elucidator, according to Moncreiff, isn’t so good at “doubtful cases.” For those, he thought, another type of advocacy is needed, that of what we might call the “obnubilator,” who tends to becloud the issues: “There are … [lawyers] who have the faculty of seeing the plausibility of every point in a case, but who cannot recognize that one is paramount and the others mere excrescences. Advocates of this stamp are more successful in doubtful cases because by the subtlety of their argument they draw off the attention of their hearers from their points of disadvantage, and perplex even their own intellectual vision.”

Moncreiff, mind you, set up his antithesis as being two types of lawyers—what I’m calling elucidators and obnubilators. Is it possible that the elucidator always has the edge? And that in a weak case, the elucidator can moderate just how lucid to be? That is: Perhaps a clever elucidator, in a tactical move, won’t clarify to such an extent as to show why the point being put forward is the weaker one. Arguably if the elucidator has the weaker side, then clarity may make the weaknesses manifest. If so, the edge may indeed go to the stronger side of the case even if the lawyer on that side is an obnubilator.

But elucidating requires great skill, and it’s therefore rare to find a top-notch elucidator. What judges all too commonly encounter is a pair of obnubilators. Yes, there’s a lawyerly predisposition to jumbling the issues. As Justice Oliver Wendell Holmes once quipped, “Lawyers spend a great deal of their time shoveling smoke.” And when you get two obnubilators in a doubtful case, the advocate with the greater command of language has the real edge. But there’s going to be much drudgery for the clear-headed judge.

My own favorite elucidator, for whom I worked closely during my first two years in practice, was the late Marvin S. Sloman of Dallas, a renowned appellate advocate. It simply wasn’t in him to put a point obscurely. In a doubtful case, he’d shift his ground of argument to a stronger position—or else he’d settle. I never saw him try to confuse a court.

Consider the Sloman technique in Centaur Insurance v. Pak-Mor Manufacturing. In an appeal to the Supreme Court of Texas, the petitioner, Centaur, sought review of a default judgment in favor of Sloman’s client, Pak-Mor. After filing its petition for review, Centaur wrote a letter to the clerk of court claiming that its motion for new trial had been adequate because it had “alleged facts that in law would constitute a defense.” And it attached loads of documentation (a crateful, in fact).

In response, Sloman brandished a rapier: “Contrary to Centaur’s statement at page 2 of its letter, a party seeking a new trial must do more than simply ‘allege facts that in law would constitute a defense.’ Rather, as this court has made crystal clear, ‘the motion must also be supported by affidavits or other evidence proving prima facie that the defendant has a meritorious defense.’ [Citation.]” (If only he hadn’t polluted his text with citations but instead had footnoted them—oh, but that was last month’s column!)

Then for the gutting: “Centaur is incorrect in stating that its alleged defenses were supported by affidavit. To the contrary, the record clearly shows that Centaur’s motions were unsworn and that the only affidavits attached to the motions related solely to Centaur’s claim of mistake or accident and not to any of its purported defenses. [Citation.] And although Centaur did attach five purported insurance-related documents to its motion [citation], those documents do not amount to ‘other evidence’ because, contrary to Centaur’s characterization, they were not ‘authenticated’ by affidavit or live testimony—and were not even complete.”

Then in for the kill: “Without any affidavits, a sworn motion or live testimony supporting any of Centaur’s alleged defenses, the district court did not abuse its discretion in refusing to set aside the default judgment. The court of appeals’ affirmance of that judgment should be upheld on this basis alone.” Sloman’s chaste closer for the clerk of court: “We would appreciate your calling this letter to the attention of the court.” And with that, the case against the obnubilators was won.

LEAVE IT TO THE JUDGE

Now would Sloman, or any other first-rate elucidator, ever press a point that seemed the weaker one? Yes. It can happen. Many advocates tend to become fond of whatever points they’re putting forward—unduly fond, in fact. That’s called “advocate’s bias,” which I’ve defined in Black’s Law Dictionary as “the bias that attorneys often develop in favor of a client involved in a dispute, and that may potentially cause such missteps as overlooking certain arguments or misjudging the way facts or cases may appear to a dispassionate outsider.”

Yet what happens if advocates don’t become enamored of their points? What if they don’t even believe their points to be especially strong? Is there an ethical issue raised by feigning ardor in pressing a point before a court? Is that a type of lying?

No. Not at all. It’s in the nature of paid advocacy. And the best statement on this, as on so many issues, comes from Johnson: “A lawyer has no business with the justice or injustice of the cause which he undertakes. The justice or injustice of the cause is to be decided by the judge. A lawyer is not to tell what he knows to be a lie; he is not to produce what he knows to be a false deed; but he is not to usurp the province of the jury and the judge, and determine what shall be the effect of evidence—what shall be the result of legal argument.”

Remember this, though: If you want to win, you can’t write a “hide-the-ball brief” or make a “hide-the-ball” oral argument. That goes nowhere. You must make clear points and hope the scales weigh in their favor.

This article originally appeared in the March 2014 issue of the ABA Journal with this headline: “Clarity vs. Confusion: Weighing the arguments for and against obfuscation in court.”

Bryan A. Garner, the president of LawProse Inc., is the author of many best-selling books, including Making Your Case: The Art of Persuading Judges (with Justice Antonin Scalia) and Garner’s Modern American Usage. Since 1994, he has been editor-in-chief of all editions of Black’s Law Dictionary.