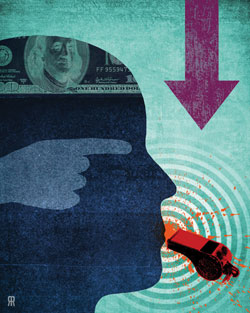 The Wall Street financial meltdown left the markets in turmoil. It also led to the most expansive legislative overhaul of financial supervision since the 1930s New Deal: the Dodd-Frank Wall Street Reform and Consumer Protection Act.

Part of the law, passed by Congress last July, juices the ability of the Securities and Exchange Commission to entice whistle-blowers to come forward. It allows huge monetary rewards to individuals with fresh information about financial wrongdoing at public companies, investment banks, broker-dealers or other organizations involved in transactions affecting the public markets.

“After the Bernard Madoff scandal broke the SEC had a lot of egg on its face,” says Jason Zuckerman, principal of the Employment Law Group, a Washington, D.C.-based firm that represents whistle-blowers.

“It’s clear that they need to do more to be responsive to the allegations they get and to encourage employees to report corporate fraud,” says Zuckerman, who co-chairs the Whistleblower Subcommittee of the American Bar Association’s Labor and Employment Section’s Employee Rights and Responsibilities Committee.

That key Dodd-Frank provision, Section 922, stipulates that whistle-blowers who provide new information to the SEC are entitled to collect rewards from to 10 percent to 30 percent of the monetary sanctions the government recovers through civil or criminal proceedings totaling more than $1 million.

Whistle-blowers must also voluntarily provide the agency with “original information” based on independent knowledge or analysis not already known to the commission nor taken exclusively from public sources.

In early November, the SEC laid out its proposed regulations to define and implement the controversial new provision. After a deadline for public comments on Dec. 17, the SEC is wading through a morass of opinion as it moves forward in the rule-making process.

Some whistle-blower advocates say the agency’s proposed rules provide too much deference to companies’ internal compliance procedures. Meanwhile, attorneys representing corporations fear what they liken to a bounty system. They see a magnitude of complaints threatening to choke the SEC’s resources and undermine existing corporate compliance systems as a flurry of employees attempt to cash in.

The main sticking point for attorneys defending corporations is that the new rules afford whistle-blowers means to report allegations directly to the SEC, putting employees at odds with companies’ internal compliance structures. The 2002 Sarbanes-Oxley Act, they say, laid out a strict set of reporting standards that helped to shore up compliance programs at publicly traded companies.

The new regulations “encourage a lot of people who are being opportunistic or who are looking to actually help create problems they can then profit from,” says Susan Hackett, senior vice president and general counsel for the D.C.-based Association of Corporate Counsel. “You’ve actually now got people working against the interests of compliance because their motivation doesn’t become, ‘Let’s fix it,’ or ‘This is wrong.’ It becomes, ‘How can I collect?’”

With the backing of major public companies ranging from Aon Corp. and General Mills Inc. to McDonald’s Corp. and Oracle Corp., the ACC laid out a range of requested changes to the SEC’s proposed rules in a Dec. 17 letter to the commission.

The association’s main proposal calls on the agency to require that whistle-blowers “first make use of internal reporting and investigative systems before submitting their reports to the Commission.”

Among other suggested revisions, the ACC also calls on the commission to bar all individuals engaged in “underlying misconduct” from whistle-blower reward eligibility. The group calls for the disclosure of conflicts of interest, such as when the individual making an allegation holds a short position in the company’s stock, betting against improved performance of its shares. That person could then stand to gain if news of an investigation were publicized.

In making their case for rules that exhaust internal compliance procedures, Hackett and other lawyers representing businesses point out that Dodd-Frank includes separate whistle-blower anti-retaliation measures designed to protect employees from reprisals such as potential job loss, demotion, suspension, threat or harassment.

“Good corporate behavior needs to be promoted,” says Tom Quaadman, vice president at the U.S. Chamber of Commerce’s Center for Capital Markets Competitiveness. In a public comment letter, filed jointly with several other business groups, the Chamber, too, called on the SEC to require whistle-blowers to first work internal compliance channels. In addition, it called for the agency to share the information it receives with entities that are the subject of a complaint.

“We’re trying to make sure that the rules operate in such a way that it enhances good corporate behavior and compliance,” Quaadman says.

FERRETING OUT THE FRIVOLOUS

Other attorneys representing corporations agree. Without a stricter system of controls to ferret out unqualified complaints, corporations will likely face a surge in bogus allegations, says Eugene Scalia, a partner in the Washington, D.C. office of Gibson Dunn & Crutcher who specializes in employment law.

“Anybody who has been in a government enforcement position or handles a substantial number of whistle-blower cases knows two things,” he says. “First, that whistle-blowers can be instrumental in identifying and correcting corporate misconduct, and second, that whistle-blowing is often used by underperforming employees to advance personal grievances they have with the employer, or even to protect themselves in their current positions.”

In its Jan. 4 public comments letter, the ABA’s Committee on Federal Regulation of Securities in the Section on Business Law also calls for minimum standards for whistle-blower status “to provide the Commission high-quality information and to minimize false, spurious or frivolous claims.”

“This is not intended on our part to suggest any tolerance for corporate misdeeds,” says committee chair Jeffrey W. Rubin, a New York City-based partner with Hogan Lovells.

“We’re hoping it would lead to higher-quality complaints coming to the SEC,” says Rubin, whose committee also favors requiring whistle-blowers to first report their allegations internally.

“Sarbanes-Oxley is now nine years old,” he says. “We have been very careful not to do anything that upends the historical development of internal compliance by improvidently implementing these provisions.”

But whistle-blower advocates like the Employment Law Group’s Zuckerman maintain that the backlash against the SEC’s proposed rules is unfounded.

“I don’t think individuals are ever eager to blow the whistle,” says Zuckerman. He co-authored a comment letter to the SEC on Dec. 17 as a member of the whistle-blower advocacy group, Voices for Corporate Responsibility, along with Change to Win, the National Employment Lawyers Association and the Government Accountability Project. “What they want to do is keep their jobs, especially when we have such high unemployment.”

He says whistle-blower programs with robust monetary rewards have proven successful, citing the False Claims Act, whose provisions were strengthened in 1986. The act authorizes whistle-blowers to prosecute contractors for fraud on behalf of the U.S. government. Those claims have resulted in the recovery of more than $24 billion, Zuckerman says.

“There is tremendous empirical evidence that it works,” he says, citing large settlements against companies such as Pfizer and Eli Lilly. “If companies are so concerned about employees blowing the whistle directly to the SEC, then they should enhance their compliance programs to address employee concerns more effectively.”

The groups co-authoring the letter with Zuckerman also worry that the proposed SEC rules don’t address coordination of investigations by overlapping federal agencies, a need they say is “particularly critical where the SEC has limited resources and must respond to claims originating from a universe of approximately 6,700 publicly traded companies and related advisors and entities.”

In addition, they called for a broader definition of whistle-blower beyond individuals to allow non-government organizations and labor unions to bring claims.

For its part, the SEC is required under Dodd-Frank to set up a new Whistleblower Office within its Division of Enforcement. It is operating under a 270-day deadline from the effective date of the legislation, with revised rules to be released mid-April.

“The comment period is closed and the staff is taking very seriously all of the comments we received,” says Stephen Cohen, an associate director in the SEC’s Division of Enforcement. With “more restrictions put on whistle-blowers coming forward, the net effect is that information might not come to the SEC. These are the issues that the commission has to grapple with.”