What Adele and Taylor Swift can teach you about finding justice 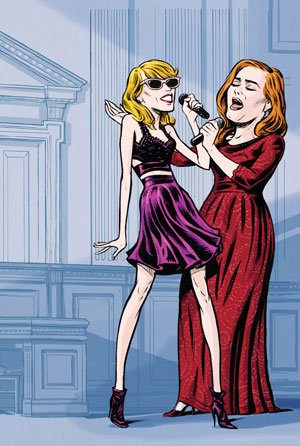 For years I was a runner/jogger. I logged 20-30 miles a week and did some of my best law work on runs. Unfortunately, my middle-aged knees and hips gave out and I had to move indoors onto the elliptical trainer at the gym. It's not quite the same thing. It's harder work psychologically—typically boring rather than renewing or productive—and I didn't break the same quality of sweat and get the same sense of release.

Then several years ago I discovered Pandora. And, after a lapse of many years, rediscovered popular music. I am a baby boomer, and the stations I listened to while on the elliptical filled imaginative gaps in my thoughts with music and lyrics, evoking much different times. Curiously, these songs also stimulated my thinking about the law.

Songs are obviously a form of storytelling. But popular songs don’t typically tell extended stories employing a dramatic structure. Rather, popular songs hark back to more primitive orality (truly, dating back to preliterate oral poets) and typically begin in medias res, with the immediacy of an emotional experience recollected, with the singers then directly transmitting the quality of the emotion via melodies and lyrics captured in their own voices. Popular songs are built on recurring oral “formulary” structural patterns, featuring catchy hooks and readily memorable idiomatic phrasings. The subject matters and themes of popular songs are limited. Often, pop songs are attempts to recapture the states of romantic love (Taylor Swift’s “Wildest Dreams”) or a highly charged romantic state (Adele’s “Million Years Ago”) or looking back in time on the intensity of these feelings, striving to recapture the past (“Georgia on My Mind”).

THE POWER OF VOICE

Popular singers, as Van Morrison observed, are still like the ancient troubadours: Embodied emotions are transformed into melodies, feelings translated into idiomatic lyrics that are seldom, if ever, grammatically correct or truly literate. What is singularly important is the expressive voice of the singer and how it is wed to the melodies and lyrics and instrumentations that speak directly to listeners, evoking shared emotion as if in intimate personal conversation. What is crucial in popular songs is the primacy of sound and the direct transmission of feeling and belief via lyrics, melody and rhythm.

Orality is also important in the law. Think of when a jury listens to testimony in a trial court, or even when the voices of lawyers speak in legal argumentation. Here, meaning-making often goes beyond the literal meaning of the words, departing from a constricted and grammar-bound literacy toward a fuller contextual orality of voices, sounds and an accompanying imagistic visual gesture. (This is discrete from the analytical and critical visuality of a reader studying text on a page.)

Often, an advocate’s voice operates in interaction with other voices dialogically (the voices of judges, attorneys, witnesses). And getting the mix just right is as important as it is in creating a successful popular song.

On the way home from the gym, I thought about the power of two songs and two young singers I’d just heard: Adele’s “Million Years Ago,” with its arcing melody that allows the singer’s voice to build in a powerful emotional crescendo in the refrain as she reflects back on a feeling of romantic nostalgia about her younger self and an imagined world that she recalls with longing and heartache. Likewise, Swift’s “Wildest Dreams” calls forth a young woman’s hopeful dream as she reimagines herself as the object she longingly desires to be perceived as in the mind’s eye of her beloved. Both singers are wedded to the music with confident, powerful voices framed by the melodies and instrumentations. These are commercial enterprises, of course, but also heartfelt and profoundly artistic expression.

At home, I downloaded the lyrics. Laying flat on the page, including multiple repetitions of phrasings, clichés, exaggerations and the accompanying formulary baggage characteristic of orality, the lyrics seemed banal without the singers’ voices. The lyrics of “Million Years Ago” seemed whiny and cliché on the page, and those in “Wildest Dreams” were almost comical, wildly self-indulgent and preposterous.

Curiously, in my day job as a legal academic, I’ve had similar experiences reading trial and appellate transcripts, attempting to decode and understand the power of successful testimonial presentations and oral arguments. Communications theorists, including Walter Ong and Marshall McLuhan, have observed how orality and oral communications are vastly different in both form and substance from literate expression. What is crucial in orality goes beyond the words; orality is about the primacy of voices and accompanying visual imagery.

Indeed, Eric Havelock, the former Sterling professor of classics at Yale, explained that the shift from orality to literacy in classical Greece happened only after a written language developed (subjugated by a formal, rule-based grammar) that seemed to replicate emotive sounds (contained in vowels). But this was a faux orality, decried by the poets, and something was clearly lost along the way; the words of literate expression, bound and constrained by the rules of grammar, had been severed from the emotive voices. This shift from orality to literacy was especially crucial in law: Justice was no longer embodied, situational, personal; it became externalized in complex legal codes. Thus, to this day, from the first days of law school, we teach our young lawyers to subjugate their emotions and beliefs (“Who cares what you feel or believe?”), discounting the power of voices and orality. Lawyers are trained to think analytically, not intuitively, and to choose words carefully circumscribed by rules of grammar and meticulous logic. In doing so, we elevate text-based literacy over emotive sounds and voices. What purportedly matters in law are soundless words upon the page.

IN SEARCH OF EMOTIONAL TRUTH

But is this all that matters? Residual orality remains important in legal practice; lawyers’ voices—and the “songs” that lawyers “sing”—remain powerful tools of argumentation and persuasion.

After listening to Pandora at the gym, I surfed YouTube for illustrations of powerful, compelling lawyer voices. Just listen to Bryan Stevenson’s singularly powerful and understated TED Talk, “We Need to Talk About an Injustice.” Listen to how Stevenson’s understated lawyer’s voice perfectly matches his subject matter, and how he sings his empathic yet righteous song about injustice in our society. Alternatively, follow the operatic cadences and theatricality of the embodied voice in Gerry Spence’s various teaching videos. Perhaps the most amazing voices are captured in a transformative TED Talk presented by performance artist, playwright and MacArthur fellowship recipient Anna Deavere Smith, who also served as a masterful teacher of law students in the Lawyering Program at New York University. In “Four American Characters,” Smith embodies the emotions and inhabits her subjects; she channels their voices in the songs that she sings.

What is transformative in “lawyers’ songs” are not formalized, grammatically correct language or a linear logic or structure constructed outside of the self; rather, these performative songs are, in large measure, about finding and expressing an emotional truth that comes from within. Here it is impossible to separate the singer from the song, the words from the voices. And the lyrics are about the longing for—and the finding of—justice.

This article originally appeared in the June 2016 issue of the ABA Journal with this headline: “Songs Lawyers Sing: What Adele and Taylor Swift can teach you about finding justice.”