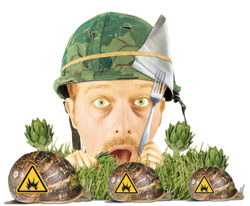 Running a restaurant can seem like a never-ending exercise in putting out fires, both figurative and literal: Vendors don’t deliver—Cancel tomorrow’s veal scallopini special!—servers call in sick, grease fires erupt.

And customers can add to the chaos by being overly demanding or suing for gastronomic distress (not to mention those nefarious nudniks who slip a cockroach or deceased rodent into the Caesar salad and feign horror).

That’s a lot to contend with, so imagine having to teach customers how to eat what they order. That’s what one diner says a restaurant’s servers should have done for him to save him from a nasty encounter with an artichoke.

Dr. Arturo Carvajal, a resident of Miami, was at a business dinner in May 2009. According to a complaint filed in October in the 11th Judicial Circuit of Florida, the good doctor ordered grilled artichokes, though he had never eaten them previously. Not knowing any better, Carvajal ate the rough, spiky dish in its entirety.

The complaint says that he sought medical assistance after the meal, and that an exploratory laparotomy revealed artichoke leaves lodged in his bowel, resulting in “pain and suffering, disability, disfigurement, mental anguish [and] loss of capacity for the enjoyment of life.”

Carvajal—who should probably avoid pineapples and oysters—seeks damages in excess of $15,000.

Meanwhile, two friends out for a special occasion could have used a lesson on how to defend themselves against a plate of escargot.

Chadwick St.-OHarra of Danville, Calif., and Steve Righetti of Sonoma were at the Seafood Peddler restaurant in Marin County in June celebrating Righetti’s birthday. They chose to start with the garlicky gastro pods as an appetizer.

With cocktail forks in hand, the two men proceeded to pierce the molten mollusks, resulting, they say, in an explosion of hot garlic butter on their faces and shirts. St.-OHarra alleges that some of the butter got into one of his tear ducts, causing temporary blindness. Righetti claims he was squirted on the nose and “humiliated.”

The pair continued with their meal and eventually filed a claim, which was rejected by the restaurant’s insurer. They decided to represent themselves in small claims court, asking for damages of $7,500 for negligence, pain and suffering. In December, a judge dismissed the case, saying the men had failed to meet their burden of proof and noting that Righetti continued trying to consume the appetizer after St.-OHarra’s ill-fated attempt.

There’s no bright line in the restaurant industry for establishing when an explanation and/or a caution should accompany a meal. Apparently—as we learned from the infamous McDonald’s incident and subsequent court ruling—we need to be told that coffee is really, really hot. But should an artichoke have to be served with a user’s manual? Should escargot come with a welding mask?

These are some of the questions that restaurant owners and managers will have to keep simmering on the back burner as the legal landscape continues to be a smorgasbord of liability du jour.