Which materials do lawyers have to turn over to ex-clients? ABA committee cites 1977 opinion 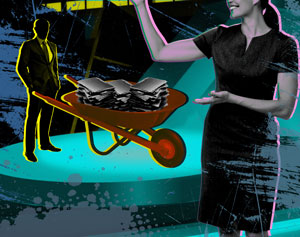 In developing its most recent opinion, the ABA Standing Committee on Ethics and Professional Responsibility had a choice between two approaches in answering the question of which papers, property and other materials a lawyer must turn over to a client when a representation is terminated.

As the committee points out in Formal Opinion 471 (PDF), issued on July 1, Rules 1.15 and 1.16 of the ABA Model Rules of Professional Conduct require a lawyer “to take steps to the extent reasonably practicable to protect a client’s interest, and such steps include surrendering to the former client papers and property to which the former client is entitled, such as materials provided to the lawyer, legal documents filed or executed, and such other papers and properties identified in this opinion.” But the opinion also notes that Model Rule 1.16(d) does not specify exactly what papers and property the client is entitled to receive at the end of the representation.

Formal Opinion 471 analyzes these issues in the context of a lawyer who represented a municipality for 10 years. When the representation terminated, the municipality requested that the lawyer provide its new counsel with all files—open and closed.

The committee could have adopted an “entire-file approach,” under which the lawyer is obligated to give the client everything in the file “unless the lawyer establishes that a specific exception applies and that certain papers or property may be properly withheld,” the opinion states.

Most state jurisdictions have adopted the entire-file approach, and the ABA opinion cites ethics opinions from Alaska, Arizona, Colorado, Iowa, Oregon and Virginia as examples of how it is applied. The ethics committee notes that the Restatement of the Law Governing Lawyers (Third) also endorses the entire-file approach by providing that “on request, a lawyer must allow a client or former client to inspect and copy any document possessed by the lawyer relating to the representation, unless substantial grounds exist to refuse.”

The ethics committee adopted what amounts to a minority rule, the “end-product approach,” which, the opinion states, distinguishes between “documents and other materials that are the end product of a lawyer’s services, which must be surrendered, and other material that may have led to the creation of that end product, which need not be automatically surrendered.” The committee cites ethics opinions from Alabama, Illinois, Kansas, Nebraska and Utah that have adopted versions of this approach.

The key to the end-product approach, states Formal Opinion 471, is that “a client is not entitled to papers and property that the lawyer generated for the lawyer’s own purpose in working on the client’s matter,” such as drafts of legal instruments, internal memoranda and research materials, internal conflicts checks and notes regarding ethics consultations.

But the opinion states that certain materials generated by a lawyer for internal use may have to be provided to the client when the lawyer’s representation of the client is terminated before the matter is completed.

In effect, Formal Opinion 471 reaffirms a position the ABA took on the issue in 1977. Informal Ethics Opinion 1376 addressed a lawyer’s ethical duty under Rule 9-102(B)(4) of the Model Code of Professional Responsibility (replaced by the Model Rules in 1983). Opinion 1376 concluded that a lawyer must turn over to the client “properties in the possession of the lawyer which the client is entitled to receive,” including the lawyer’s ‘end product.’ ” But the opinion did not require the lawyer to deliver “his internal notes and memos, which have been generated primarily for his own purpose in working on the client’s problem.”

In Formal Opinion 471, however, the committee acknowledges that lawyers often must return papers and property to clients after the termination of the representation to protect clients’ interests.

Some ethics authorities would have preferred to see the ABA adopt the entire-file approach, which they say is more client-friendly.

“The end-product approach essentially places the burden on the client to show a need for the additional documents when clients have typically never seen the additional documents,” Swisher says. “The party with the best access and most knowledge—i.e., the firm—should have the burden to show that the additional materials are of little or no use to the client. The end-product rule, in some instances, runs contrary to the facts that the client paid for the materials and that lawyers are fiduciaries with duties of open communication with their clients.”

Peter A. Joy, a professor at Washington University School of Law in St. Louis who teaches ethics, also prefers the entire-file approach. “I believe that the entire-file approach, which does have exceptions for some materials, is best for clients, and that makes it the best approach in my opinion,” he says. “The client has paid for all of the work in the file or, if a pro bono or public interest case, the work was done for the client’s benefit. It makes the most sense that the client should then be entitled to the work that the client has paid for and that was done for the client’s benefit. Given the choice between receiving the entire file or just the end product in a file, most clients and most subsequent lawyers representing those clients would want the entire file.”

In Swisher’s view, Formal Opinion 471 “does not fully consider our fiduciary status and our duty of communication” to clients. “Certain materials created for the lawyer’s own purpose are also helpful to the client,” he says. “For hourly billing statements, those are generally detailed communications with the client, regularly updating the client on the nature and amount of work.

“Furthermore, lawyers have a duty to keep their fees reasonable, and those documents and related records permit clients to review the fees for reasonableness. Finally, curmudgeonly file turnover makes it more difficult for clients to determine whether the lawyer has committed malpractice or provided ineffective assistance of counsel. The clients then have to sue to obtain discovery.”

But Swisher also sees positive elements in the new ABA opinion. He cites two elements in particular: “One, the opinion provides a fairly clear list of the materials that need to be turned over on request or on termination—and those materials that need not be turned over—although the opinion could have done more to explain that lawyers may turn over more information than the ethical rules require, and that any doubts as to what must be turned over should be resolved in the former client’s favor.

“Two, the opinion commendably breaks the end-product rule in situations in which the representation ends midstream, and thus the client or the successor counsel might need access to drafts or other materials to avoid being prejudiced in the ongoing matter.”

This article originally appeared in the September 2015 issue of the ABA Journal with this headline: “What’s Old Is New: ABA committee cites a 1977 opinion in interpreting which materials lawyers must turn over to ex-clients.”