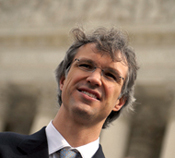 The Fourth Amendment’s protection against “un­reasonable searches and seizures” can be enforced in two ways. One is to exclude evidence found through an illegal search. The other is to sue the police for conducting an illegal search.

Both enforcement tools took a hit at the U.S. Supreme Court in a pair of decisions handed down in mid-January. Together, they send a message to judges that in close search cases, the edge goes to law enforcement, not the protection of privacy.

In Herring v. United States, the justices said the exclusionary rule is not triggered when the police negligently or unwittingly violate the Fourth Amendment. And in Pearson v. Cal­la­han, they said the police cannot be sued if they enter a house without a warrant after receiving a signal from an informer inside. The court said the law in this area is not “clearly established,” so the police are immune from liability.

Stanford Law School associate pro­fessor Jeffrey Fisher says the court is undercutting privacy rights on both fronts. “They are chopping off the arms and the legs. They are curbing the exclusionary rule and making it nearly impossible to win civil damages at the same time,” says Fisher, who represented Bennie Herring. He says of Callahan: “It worries me that they are openly inviting the lower courts to avoid deciding the Fourth Amendment questions.”

The court’s opinion in Herring prompted much talk about the future of the exclusionary rule. Washington, D.C., attorney Thomas Goldstein predicts it will prove as a matter of criminal law to be “one of the most important rulings in that field in the last quarter century.” A headline in the New York Times declared that the court was a “step closer to repeal” of the exclusionary rule.

But talk of repeal runs into at least one difficulty: Justice Anthony M. Kennedy, one of the five justices in the Herring majority, said three years ago that he would not be on board. “The continued operation of the exclusionary rule, as settled and defined by our precedents, is not in doubt,” he wrote while concurring in Hudson v. Michigan.

In that case, a 5-4 majority ruled that the exclusionary rule is not triggered if the police, with a search war­rant, enter a home without pausing for 10 seconds to announce their pres­ence. George Washington Uni­versity law professor Orin Kerr, a Fourth Amendment expert and a for­mer Kennedy clerk, plays down the Herring decision. “It is more evolutionary than revolutionary,” he says.

Nonetheless, the decisions have revived the debate about how the Fourth Amendment is to be enforced. The exclusionary rule has a long history, as well as famous detractors. In 1914, the court adopted the federal exclusionary rule in a case in which agents had searched a Kan­sas City, Mo., man’s home for illegal lottery tickets while he was at work.

“His right to be secure against such searches and seizures is of no value and … might as well be stricken from the Constitution” if it can be ignored with impunity, the court said in Weeks v. U.S. But 12 years later, in People v. Defore, then-New York Judge Benja­min Cardozo spoke for skeptics when he declared that the exclusionary rule meant the criminal “shall go free because the constable has blundered.”

The exclusionary rule went nation­al in 1961 when the Warren court ap­plied it to state and local police in Mapp v. Ohio. In that case, officers without a search warrant forced open the door of Dollree Mapp’s home and found obscene materials hidden in a trunk. Justice Tom Clark said the “right to be secure against rude invasions of privacy” is protected by the Fourth Amendment, and “we can no longer permit that right to remain an empty promise.”

But in the 1980s, the Reagan administration launched an effort to weaken or repeal both the exclusion­ary rule and the Miranda doctrine. Among the young lawyers working toward that end were John G. Rob­erts Jr., Samuel A. Alito Jr. and Clarence Thomas.

Three years ago, they joined the Hudson opinion written by Justice Antonin Scalia, a Reagan appointee, which served notice that the exclusionary rule was on shaky ground. “Suppression of evidence has always been our last resort, not our first impulse,” Scalia wrote. “The exclusion­ary rule generates substantial social costs, which sometimes include setting the guilty free.”

How then can the Fourth Amend­ment be enforced? Scalia suggested suing the police. After 1961, the court had opened the door to suing local officials in federal courts, he said. And Congress authorized attorney fees for successful civil rights plaintiffs, even if their recovery is small. “As far as we know, civil liability is an effective deterrent,” Sca­lia wrote. “We cannot assume that exclusion … is necessary deterrence simply because we found that it was necessary deterrence in different contexts and long ago.” Kennedy agreed with most of Scalia’s opinion.

With the exclusionary rule in some doubt, the court took up Herring, which turns on an arrest warrant that should have been removed from a police computer.

Mark Anderson, a police investigator in Coffee County, Ala., had had several run-ins with Bennie Herring. When he saw Herring leaving the police station on an unrelated matter, Anderson asked a warrants clerk to check Herring’s name for outstanding warrants. A clerk in a neighboring county reported there was a warrant for Herring’s arrest.

Acting on that information, Ander­son stopped Herring’s pickup truck and found methamphetamine in his pocket and a handgun under the seat. About 10 minutes later, the officer learned there had been a mistake. The arrest warrant had been withdrawn five months earlier, but that fact had not been entered in the police department’s computer.

Chief Justice Roberts said a “negligent bookkeeping error” by the police does not call for suppressing the evidence. He recast the exclusionary rule as less rule and more case-by-case balance—with the weight on the side of preserving the evidence. The “judiciary-created” exclusionary rule is “not an individual right,” Rob­erts said, but a means to deter unlawful conduct by the police.

“The benefits of deterrence must outweigh the costs,” he wrote, and those costs include “letting guilty and possibly dangerous defendants go free. … The exclusionary rule serves to deter deliberate, reckless or grossly negligent conduct,” he added, not innocent or honest mistakes by officers. Justices Scalia, Kennedy, Thomas and Alito agreed.

Pearson v. Callahan was a meth case as well, but it posed the issue of whether the police can be sued for violating the Fourth Amendment.

Agents of the Central Utah Nar­cot­ics Task Force gave a $100 bill to an informer to buy meth from the trailer home of Afton Callahan. Shortly after he was allowed to enter, the informer signaled to the agents, who entered without a warrant and arrest­ed Callahan.

The Utah state courts ruled the police raid was an unconstitutional invasion and threw out the evidence. Callahan then sued Cordell Pearson and several other agents. Callahan’s civil suit was tossed on summary judgment by the federal trial court, but reinstated by the Denver-based 10th U.S. Circuit Court of Appeals. In a unanimous decision, the Su­preme Court reversed the 10th Cir­cuit victory for Callahan without ruling whether a home search is constitutional if it is based on a third party’s consent.

Justice Alito said several federal courts had upheld searches based on “consent once removed,” and “because the unlawfulness of the officers’ conduct in this case was not clearly established, [they] are entitled to qualified immunity.”

One might think the Supreme Court’s duty is to “clearly establish” the law when lower courts are divided on a constitutional issue. How­ever, the justices said it sometimes makes more sense—and certainly involves less work—to skip the constitutional question and preserve police immunity precisely because the law is uncertain.

Thus the court set aside a 2001 ruling in Sau­cier v. Katz that required judges to decide first any constitutional issue and then decide whether the law was “clearly established” at the time of the incident. Judges may still follow that two-step process, but they need not do so, the court said.

Former Solicitor General Paul Clement sees a downside to the court’s willingness to leave the law in flux. “In a constitutional question like this one, it is either yes or no. It’s either OK or not OK. And this means the answer will be pushed down the road indefinitely,” he says. “They took this case because there was a circuit split on this question. And they decided to leave the circuit split unresolved.”