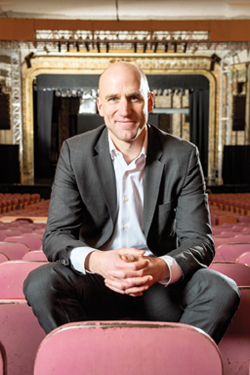 The band’s self-titled 1992 debut album went quadruple-platinum thanks to the strength of the chart-topping single “No Rain,” and they’ve toured with the Rolling Stones. Stevens also has enjoyed success as a music producer and as a guitarist with other bands. Recently, however, the 44-year-old ax master signed on for an entirely different kind of gig: He became a lawyer.

Last year, Stevens became a first-year associate in the Philadelphia office of Ballard Spahr. It’s his first office, first regular work schedule and quite possibly the first time he can’t show up somewhere in ripped jeans.

Q. The first question must be: Why?

A. It was at the end of 2008, mid-December, and we had just canceled our tour due to our own internal instability. We had been on the road for 10 months, my wife was pregnant with our second child, we already had a 2-year-old, and suddenly it wasn’t fun anymore. Within two days, I decided I was going to college. We moved to Swarthmore, Pennsylvania—my wife grew up there, and her parents still live there—and by January, I was sitting in class at Delaware Community College.

Q. Was it a difficult adjustment?

A. I just did it. I ground it out. I like reading; I like studying and engaging with ideas.

Q. It wasn’t the first time you had to figure out a new direction—I am thinking specifically of 1995, when Blind Melon lead singer Shannon Hoon died from an overdose and the band broke up.

A. We were at the apex of our career when Shannon died. We were on all cylinders, and it was over like that. We were very close, and it broke my heart. We walked away from the band for 10 years. I was traumatized. My whole life, I had been working toward this, and it worked—and then it just ended abruptly, and I lost my friend. In 2006, two of the guys in the group said they’d met a singer who just blew them away; he could sing all the old songs, and we discovered we could write new ones with him—it just worked. We rebuilt our career, made a record, went on tour. But it went down in flames at the end of 2008.

Q. When you returned to school, was a law degree a part of your plan?

A. I had been considering it, especially as I got into my mid-30s. Rock ’n’ roll is a young person’s sport—it’s hard to maintain that kind of energy as you get older, or at least do so gracefully.

I had dealt with lawyers over the years, but I found out that the deal-making wasn’t what interested me about it. I liked what happened when the deals went wrong. I liked forming arguments, taking a position and defending it. Other than getting a law degree, I didn’t have a big plan on how I would approach a career, post-law school. My strategy was: I was going to go to the best law school I could get into, and then I’d see where the chips fell in the end.

Q. Did your classmates ever ask you to perform in things like the law school follies?

A. I have been asked to do these things, and I have done them. Some of these experiences have been less embarrassing than others.

A. Penn has a program where every student is required to do a certain amount of pro bono service. I did that through Ballard with the Mural Arts Program, and I started meeting people up here. I felt like this place had a pulse. Obviously, there are a lot of smart lawyers at the firm, and I thought, “I could learn a lot here.’’

Q. Are you still performing with Blind Melon?

A. Yes, we just did some shows in California. But I am not touring like I was—I won’t go and live on a bus again.

Q. Ever tempted to become the band’s lawyer?

A. No, because they wouldn’t pay me my rate! I am kidding. I do look at stuff, but I wouldn’t represent the band. I don’t want to be in that position.

Q. Do your kids appreciate how cool it is to have a dad who moonlights as a musician?

A. They’ve been to shows. We went out to California a few months ago and played this incredible venue—an old amusement park on the beach in Santa Cruz. We headlined, and there were about 8,000 people. For about 15 minutes, there was a window of “Wow, that’s pretty cool!” and then someone flipped the switch, and I got no respect again. I was arguing with them about brushing their teeth in the hotel later that night.

Q. You’ve been lawyering for almost a year now. Are you enjoying it?

A. I find it kind of exhilarating—maybe that’s not the right word, but I like it. I am engaged all the time. I spend my day solving problems, and that feels like a natural fit. I am not happy unless I have a big challenge. I like the feeling of being up against it. And given the nature of this job, which often puts you in that position, I am very happy.

This article originally appeared in the March 2015 issue of the ABA Journal with this headline: “It’s Only Rock ’n’ Roll: Why did the lead guitarist of Blind Melon leave music for labor and employment law?”