You’re a Lawyer Now, So You Can Stop Sounding Like One 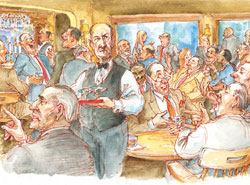 The local bar association asked Angus and Judge Horatio Standwell to do the next Wednesday night program on the “art of persuasion.” So on Monday morning, Judge Standwell showed up at our office with a jug of dark mountain roast coffee and a box of oatmeal raisin cookies from the Donut Shop.

“I know you claimed we could probably just wing this one without any preparation,” the judge said, “but I figured kicking a few ideas around a jug of coffee and some cookies ought to stimulate our creative powers.”

“Now I know why you’re on the bench and I’m not,” said Angus. “Bringing coffee and cookies was a judicious thing to do. Some people just naturally know how to make life more enjoyable than others. Let’s go in the library and see whether they have a positive effect on our powers of logic and persuasion.

“There are a few things you have to do whenever you try a case, with or without a jury,” said Angus, warming up with a big cup of coffee in hand.

“Amen,” said the judge. “And first is shaking off a lot of our law school training, which is probably the most pernicious source of incomprehensible bafflegab known to the legal profession.”

“Agreed!” said Angus. “I still remember my first day of law school. Mike Reynolds—who sat next to me in the second row—was the first one called on in ‘Mad Man’ Morgan’s torts class. The case was simple enough, but poor Mike stumbled around so hopelessly that ‘Mad Man’ roared like a lion, saying, ‘Mr. Reynolds, if you cannot state the facts of the case and tell us the holding of the court, could you at least make a sound like a lawyer?’ ”

“The same thing happens every fall in virtually every law school in the country,” Judge Standwell said. “It’s how the serpents of confusion and sesquipedalian tergiversation slither into the Eden of effective legal communication.”

“It means pretty much what it sounds like,” said the judge. “Hiding what you’re saying inside long-winded bafflegab.”

“How about, ‘This errant pedantry, up with which I will not put?’ ” said Angus.

“Either one is a great way to start our list of big ideas,” said Judge Standwell.

TO HEAR ONE IS TO KNOW ONE

Stop in the Brief Bag or any popular watering hole near the courthouse around 5 p.m. on a Friday, and you don’t even need to have your eyes open to identify the lawyers. You can even separate the personal injury lawyers from the corporate litigators by their tone of voice and word choices without seeing how they’re dressed or trying to follow what they’re saying.

Not that there is anything wrong with being a lawyer. On the contrary, it’s a magnificent profession. The problem is, too many lawyers have an unfortunate air of professional arrogance about them. Just go into the Brief Bag, and you’ll hear what we mean.

TALK IN THE NOW

Your opening statement is typically the most important part of what you do and say in any contested case.

One great way to make your statement of facts come alive is to do your opening in the present tense—as if it’s happening now. That way you use your opening to take the judge and jury to the scene with your words—whether it’s “seeing” a train wreck, “witnessing” a backyard murder or “sitting in” on a secret meeting in a corporate headquarters.

Should you use demonstrative evidence in your opening? Of course, which is why you should have those exhibits pre-marked and pre-admitted into evidence. That way you can take the judge and jury “to the scene” so they can see for themselves where and how the real events took place.

The judge and jury expect you to behave like a true professional—careful, knowledgeable, thoughtful and considerate—whether or not they are capable of acting that way themselves. Don’t let them down.

ARGUE TO THE JUDGE, NOT AT THE JUDGE

It is not always true, but in the minds of the judge and jury, the judge is the smartest lawyer in the room. Whether judges are appointed or elected, laypeople typically assume they are selected on the basis of merit.

Which means that if the judge makes an erroneous ruling against you, and your jurisdiction requires that you take exception to the ruling to preserve it as an appealable issue, whatever you do, be polite: “Your honor, may the record reflect that the defense respectfully takes exception to the court’s ruling?”

Years ago, incidentally, there used to be some criminal court judges in Cook County, Ill., who would signal their court reporters to not record a defense lawyer’s attempt to make a record of a judge’s erroneous ruling. That meant the only way to protect your record was to hire a supplemental court reporter at your own expense.

The old saying is reason enough: “Sarcasm is the last weapon of the defeated wit.”

But a far better reason to avoid sarcasm is that you will undoubtedly offend the judge and jury, not to mention the court reporter, witnesses, opposing counsel and security guards.

You may think some biting, sarcastic response sounds witty, but chances are it’s going to hurt you more than it will help.

YOUR LAST TIME TO TALK

When you represent the party with the burden of proof—typically the prosecutor in a criminal case or the plaintiff in a civil action—you normally have the right to open and close final argument.

But you don’t have to if you don’t want to. You can waive your right to open and let the other side open. That way, everything you say can be responsive to your opponent’s final argument.

The problem is, it’s a risky choice. Suppose you waive your right to open and your opponent figures that because you’re a better talker than he is, he’ll waive final argument, too, leaving the judge and jury to decide the case without the benefit of all your magical ideas.

But watch out! You and your opponent’s two waivers don’t keep the judge doing his or her own summation of the case—which they can do whether or not you give a final argument.

The net result is that someone who doesn’t know the case nearly as well as any of the lawyers sums it up for the jury.

So basically, if both sides take the waiver route, you’ll both be stuck hearing a judge who wasn’t listening all that closely to the testimony do a boring summation that is going to miss all of the good ideas that both sides had been saving for the end of the trial.