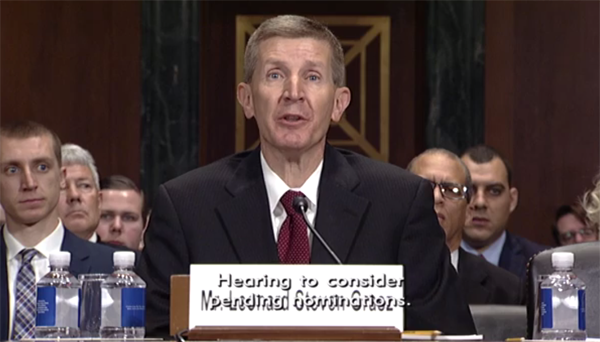 Leonard Steven Grasz testifies before the Senate Judiciary Committee at his nomination hearing.

Republican senators on the Senate Judiciary Committee expressed harsh criticism of the "not qualified" rating given to a candidate for the St. Louis-based 8th U.S. Circuit Court of Appeals during a hearing Wednesday morning.

The ABA Standing Committee on the Federal Judiciary unanimously approved a “not qualified” rating for Omaha, Nebraska, attorney Leonard Steven Grasz of Husch Blackwell, with one member abstaining.

“Given Steve’s extensive legal experience, I was shocked to hear that the American Bar Association concluded that Steve is not qualified to serve on the 8th Circuit. And I was not alone in my surprise,” Sen. Deb Fischer, R-Neb., testified to the committee during Grasz’s nomination hearing. “I am sad to say that after thoroughly examining the substance of the ABA’s report, it is evident to me that the ABA evaluation of Mr. Grasz was a baseless political character assassination.”

On Wednesday afternoon, ABA President Hilarie Bass issued a statement of support for the standing committee and its work.

“Committee members conduct extensive, confidential reviews of every nominee’s integrity, professional competence and judicial temperament,” Bass said. “The committee does not take into consideration a nominee’s philosophy, political affiliation or ideology. In the case of Leonard Steven Grasz, for example, committee members interviewed 207 lawyers, judges and others who have worked with Mr. Grasz in various capacities, some for decades.”

“The American Bar Association is proud of the Standing Committee’s comprehensive, nonpartisan reviews of every federal judicial nominee,” Bass continued. “The quality of our courts and our system of justice depends on it.”

In a letter (PDF) to the Senate Judiciary Committee, the chair of the standing committee, Pamela Bresnahan, explained that its investigation had determined that Grasz did not meet its standards for judicial temperament, and that “the people interviewed believed that the nominee’s bias and the lens through which he viewed his role as a judge colored his ability to judge fairly.” Earlier ABA Journal articles provide more detail on the committee’s evaluation of Grasz and outline how the investigations are conducted. 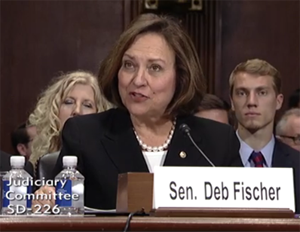 Sen. Deb Fischer of Nebraska testifies before the judiciary committee.

Fischer criticized the standing committee’s confidentiality policy for the people it interviews, saying that “anonymous sources” should not be relied on for matters that are subjective and that she did not feel the committee had produced “corroborating evidence” for their determination that Grasz’s bias was an issue.

Sen. Ben Sasse, R-Neb., who led the hearing in place of Chairman Chuck Grassley, R-Iowa, praised Grasz and said that he was “a bit baffled” by the standing committee’s rating. He noted the close community within the state—one of the Grasz family friends attending the hearing had been Sasse’s children’s pediatrician—and introduced letters of support for Grasz’s nomination from Nebraskans of both political parties. Sasse asked Grasz to comment on allegations that he’d be improperly influenced by his deeply held views.

“If I’m so privileged as to be confirmed to this position, I would be setting aside the role of an advocate and taking on a completely different role where my personal views, my personal opinions, past advocacies on behalf of clients, would have no bearing,” Grasz said. “The role of a judge is to apply the law fairly and impartially regardless of any past views or opinions.”

Grasz also pointed to work he’d done with lawmakers from both parties during his 11 years as Nebraska’s chief deputy attorney general as proof that he is capable of separating his personal views from his professional duties.

Sen. Sheldon Whitehouse, D-R.I., was the ranking minority member at the hearing. Whitehouse asked Grasz to comment on the fact that he was the first circuit court nominee since 2006 to receive a unanimous “not qualified” rating, and whether he felt that the 14-member vote was because of partisanship.

“Senator, I have great respect for the amount of time and effort that the American Bar Association put into the process. I do respectfully disagree with the result,” Grasz replied. “As a nominee I think it’s important for me to respect that process. I would not try to advise this committee the amount of weight that it would give to that, I think that’s totally within the discretion of the committee, to give whatever weight you want to their evaluation.” 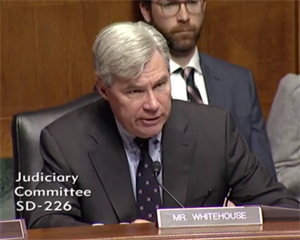 “So I think it would be hard for the committee to ascribe the outcome in this case to a general partisanship of the ABA process,” Whitehouse said. “It would not be consistent with the facts.”

Whitehouse also questioned Grasz about a different concern the investigators had expressed.

“There are a number of themes that emerge from the ABA report. The first is difficulty getting people to speak candidly about you in your home state because of what one reviewer called ‘repercussions’ that they feared, and what the other reviewer called ‘an atmosphere of unusual fear’ around your nomination, that you are well-connected politically and that there would be repercussions that caused people to be hesitant to speak with them,” Whitehouse said. “Do you have any concern about why it is so many of your colleagues would strike these interviewers as fearing repercussions or having unusual fear in terms of speaking to them candidly about you?”

“Senator, I would have two comments on that,” Grasz replied. “First of all, that comment or criticism was never shared with me by the reviewers, so I have no idea where that may have come from. On the other hand, it’s my opinion that all members of the bar should feel free to speak freely to reviewers when they’re conducting this or any other judicial review.”

Questions from the other Republican members of the committee focused on how Grasz viewed the role of a judge as opposed to that of an advocate. Sens. Orrin Hatch, R-Utah, and Jeff Flake, R-Arizona, were also critical of the standing committee’s evaluation of Grasz, with Hatch calling the result “ridiculous” and “political,” and Flake saying that the ABA had a “long history of political liberal activism.” Several senators asked Grasz probing questions about the ABA evaluators’ behavior and what they had asked him in their interviews. He said that he had been asked about his views on social issues, and that the second of the two interviews he’d had with ABA evaluators was confrontational. He told Flake that the second evaluator had used the term “you people” to refer to conservatives and Republicans.

The Democratic senators asked Grasz about his views on LGBT rights, abortion and religious freedom. Many focused on Grasz’s role as board member of the Nebraska Family Alliance, and the organization’s anti-abortion and anti-gay marriage positions. Sen. Mazie Hirono, D-Hawaii, asked whether Grasz would be prepared to commit to recuse himself in matters relating to abortion and LGBT rights, which Grasz pledged to handle on a case-by-case basis.

Sen. Richard Blumenthal, D-Conn., asked Grasz about a piece of commentary he’d written for the Lincoln Journal-Star in 2012 about the decision in NFIB v. Sebelius, which preserved part of the Affordable Care Act. In it, Grasz wrote that the decision “placed the legitimacy of the court as well as our freedom as Americans in great jeopardy” and said that Chief Justice John Roberts “will go down in history not as the disinterested umpire he promised to be, or the advocate of judicial restraint his supporters believed him to be, but rather as the one who ushered in the ultimate transfer of limitless power to the federal government.”

Grasz told the senators that he’d written that in his private capacity and had felt compelled to speak on it as the chairman for Nebraskans for Judge Roberts, which had been formed to support Roberts’ nomination to the Supreme Court. Now as a judicial nominee, he felt it would be not be “appropriate or respectful to critique or comment on my superiors.”

No member of the ABA Standing Committee on the Federal Judiciary testified Wednesday, but Sen. Grassley told his colleagues that representatives of the committee would be appearing Nov. 15 to answer any questions about their process or Grasz’s evaluation in particular.