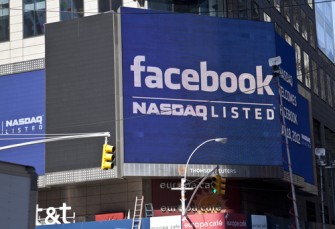 A sign announcing Facebook IPO is flashed on a screen outside the Thomson Reuters building at the opening bell in Times Square on May 18, 2012. lev radin / Shutterstock.com

A federal appeals court has reinstated a claim against the Venable law firm in a suit by investors who say the law firm’s client scammed them into paying $11.25 million for Facebook shares that didn’t exist.

The suit had alleged a then-Venable partner stated that Dennis had access to millions of Facebook shares, the sale is legitimate, and Dennis “is who he says he is.” The partner helped Stratos open bank accounts to hold investor funds after he was blacklisted at two banks, the suit had claimed.

Stratos was convicted of wire fraud and money laundering last year in connection with the Facebook deal, according to the Recorder.

A Venable spokesperson had no comment, according to the Recorder. Gibson, Dunn & Crutcher represented Venable. “While we respectfully disagree whether the complaint was properly pled, we will now vigorously challenge the merits of the allegations,” a Gibson Dunn spokesperson told Bloomberg.