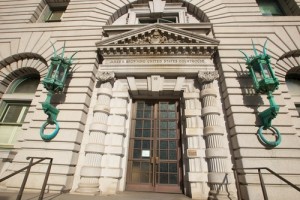 The 9th Circuit is the second federal appeals court to rule against the revised ban, report the Washington Post and the New York Times.

The Richmond, Virginia-based 4th U.S. Circuit Court of Appeals affirmed an injunction in an en banc opinion in May. The court found a likely establishment clause violation and said the revised travel ban “drips with religious intolerance.”

The U.S. Justice Department has asked the U.S. Supreme Court to hear the 4th Circuit case.

The 9th Circuit said it did not need to reach the establishment clause claim because of the statutory violations.

Trump railed against the 9th Circuit in a Tuesday morning tweet.

Well, as predicted, the 9th Circuit did it again - Ruled against the TRAVEL BAN at such a dangerous time in the history of our country. S.C.

The revised travel ban reduces from seven to six the number of Muslim-majority countries from which travel into the United States is banned for 90 days. It also suspends the entry of all refugees for 120 days and reduces the cap on the admission of refugees from 110,000 to 50,000 for the 2017 fiscal year. The revised order no longer prohibits entry by lawful permanent residents and current visa holders and allows case-by-case waivers.

The appeals court said Trump had failed to make a sufficient finding, as required by the Immigration and Nationality Act, that allowing entry of the banned travelers into the United States would be detrimental.

“National security is not a ‘talismanic incantation’ that, once invoked, can support any and all exercise of executive power” under the immigration law, the court said.

The court also said Trump’s executive order “runs afoul” of provisions that bar nationality-based discrimination and require a specific process when setting an annual cap on the admission of refugees.

The INA “gives the president broad powers to control the entry of aliens, and to take actions to protect the American public,” the decision said. “But immigration, even for the president, is not a one-person show. The president’s authority is subject to certain statutory and constitutional restraints. We conclude that the president, in issuing the executive order, exceeded the scope of the authority delegated to him by Congress.”

The 9th Circuit did rule for the administration on one issue, however, according to the Times and the Post. The court said Watson should not have barred the administration from conducting an internal review to assess its vetting procedures.