'Monkey selfie' case may hang around in 9th Circuit 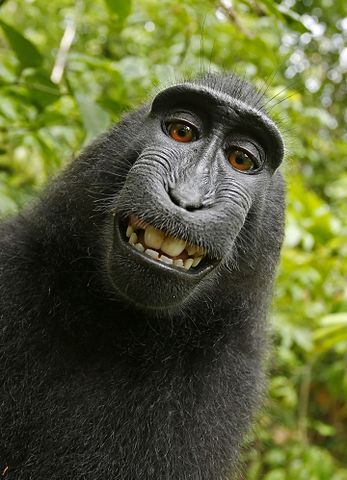 It's the case that keeps hanging on: the 9th U.S. Circuit Court of Appeals may reconsider an April decision that held animals can't sue for copyright infringement, a ruling that was supposed to settle the "monkey selfie" debacle.

At least one member of the three-judge panel that decided the copyright case is asking the court to reconsider the ruling en banc. Lawyers for People for the Ethical Treatment of Animals, photographer David Slater and publisher Blurb Inc. were asked on May 25 to file briefs within 21 days. The Recorder and Law360 have stories.

If a majority of the 9th Circuit judges vote to grant an en banc rehearing, the court could set aside last month’s ruling that Naruto—the crested macaque that took several photos in 2011 on Slater’s unattended camera on a reserve in Indonesia—lacked the required standing to file a lawsuit under the Copyright Act against the photographer.

The suit, filed by Irell & Manella for PETA acting as Naruto’s next friends, claimed Naruto owned the copyright to the photo, and that Slater had infringed on Naruto’s copyright by publishing a book with the now-famous images. Back in September, Slater, Blurb and PETA struck a deal in which Slater agreed to donate 25 percent of future proceeds from the photos to support charities dedicated to protecting monkey welfare and habitat.

The litigants requested the San Francisco-based appeals court to dismiss the suit, but the panel decided to rule despite the settlement. On April 23, it sided strongly with Slater:

“We must determine whether a monkey may sue humans, corporations and companies for damages and injunctive relief arising from claims of copyright infringement,” wrote Judge Carlos T. Bea in the opinion. “Our court’s precedent requires us to conclude that the monkey’s claim has standing under Article III of the United States Constitution. Nonetheless, we conclude that this monkey—and all animals, since they are not human—lacks statutory standing under the Copyright Act.”

The May rehearing request did not say which judge sought the rehearing, but the members of the panel were judges Bea and N. Randy Smith of the 9th Circuit and U.S. District Judge Eduardo C. Robreno of the Eastern District of Pennsylvania. Bea wrote the majority opinion and Smith concurred in part, but raised jurisdictional questions about whether PETA could have next-friend standing.

“The issue of animal standing in federal court is a serious and important question,” says Slater’s lawyer Andrew Dhuey. “David Slater cares deeply about animal rights and welfare. David’s response to this en banc order will be made with his love and concern for all animals in mind.”

“PETA looks forward to filing its brief for an en banc review of the ‘monkey selfie’ case,” says PETA’s general counsel Jeff Kerr. “Naruto the macaque should be entitled to the copyright of the photos that he undeniably took, just like any other photographer.”