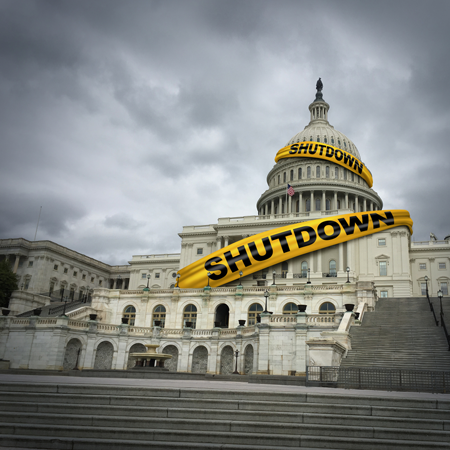 Resolution 10B, sponsored by the New York State Bar Association, was originally drafted before Friday’s legislation that reopened the government. However, President Michael Miller of the NYSBA said on the House floor that members were concerned that the situation was likely to recur. He painted a picture of federal employees lining up at food pantries and aircraft safety inspectors deemed nonessential.

“The shutdown was a national embarrassment, but worse, it was a disgrace,” Miller said. “Federal courts across our great nation were forced to cut back operations severely and in some cases shut down entirely.”

The bar group’s report notes that the shutdown had bad effects on the justice system. The federal courts were able to sustain operations through a combination of reserves and aggressive cost-cutting. But parts of the system were not functioning: FBI agents said their investigations were impacted; contractors weren’t getting paid; numerous civil cases were postponed; and U.S. Marshals limited the hours of operation in the Southern District of New York. The immigration court system was shut down completely to nondetained immigrants, and court staff serving detained immigrants were working for free.

Before the House voted, delegate Ted Davis of Georgia moved to amend the resolution to condemn federal shutdowns, plural, in recognition of the fact that the most recent federal shutdown has ended. This caused a brief pause while the resolution was so amended. There was no opposition to the amendment. Connecticut state delegate Daniel Schwartz of Hartford spoke in favor of the resolution before closing, noting that delayed justice is also an attack on the rule of law.

The measure passed with no audible opposition.

That vote immediately preceded Resolution 10C, sponsored by the Virgin Islands Bar Association and the Puerto Rico Bar Association, and also on a matter of recent political importance. Those jurisdictions and several states were allocated $90 billion in disaster-relief funds by Congress in response to the hurricanes, floods and wildfires of 2017. That disaster funding is still being used, and some of the affected areas are not yet fully recovered, but President Donald Trump has recently begun suggesting that he may redirect the emergency funds to build a border wall between the United States and Mexico.

Anthony Ciolli, the immediate-past president of the Virgin Islands Bar Association, condemned the idea because of its effects on the parts of the United States that were hit hardest by 2017’s natural disasters. The Virgin Islands and Puerto Rico were hit by two Category 5 hurricanes in a row, he said. Providing emergency relief to those affected should not be controversial.

No one rose to speak in opposition, but delegate Carlos Rodriguez-Vidal of the Bar Association of Puerto Rico chimed in to share his personal experience. In Puerto Rico, he said, communities were forced to spend months without electricity and replace some of the most basic infrastructure on the island.

“The rule of law demands that the current administration implement the [law as enacted],” he said. “Diversion of disaster-relief funds for other purposes is unacceptable.”

That measure, too, had no audible opposition when it passed.