Restrictions on firearms in government buildings and polling places should be considered, says ABA House 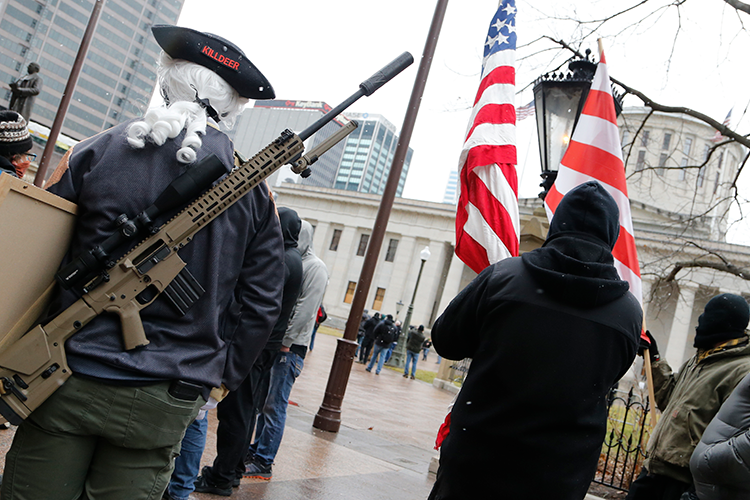 In the wake of the recent attack on the U.S. Capitol, death threats against election officials and the sight of armed groups at state capitols, the ABA House of Delegates on Monday called for restrictions on firearms in some government buildings and polling places.

Resolution 111 calls for federal, local and state governments to enact gun control laws and regulations “to prohibit the possession and display of firearms by persons other than governmentally authorized military, law enforcement or security personnel in and around buildings and at meetings where legislative debate is conducted or where ballots are cast, received, processed or counted in order to prevent violence, avoid impacts on public health and safety, and ensure that armed intimidation does not disrupt or discourage open, robust debate on public issues or interfere with the electoral processes critical to the functioning of our democracy.”

Approval of the resolution comes after a mob stormed the Capitol building Jan. 6 and as clashes between armed groups and protesters were on display during a summer of unrest. In the past year, armed protesters have appeared at state capitols in Michigan, Ohio, Texas and Oregon and were also at protests over racial injustice.

Delegate Monte Frank of the Standing Committee on Gun Violence pointed to the recent attack at the Capitol as a reason to make sure that firearms are barred from state houses, town halls and polling places.

“What’s at stake? Free and fair elections, robust open debate on public issues free from chilling effects caused by armed intimidation or violence, and the ability of public servants do their work without fear,” Frank said at the meeting Monday.

He suggested that the attack on the Capitol could have been deadlier without a prohibition on firearms.

“Imagine what could have happened if that mob had been armed with AR-15s or even handguns, like the group that took over the Michigan statehouse?” Frank said. “It could have easily have turned into a massacre.”

Amy Swearer, a legal fellow at the Heritage Foundation, a conservative think tank, said she was “repulsed” by threats against the democratic process. But she argued that Americans should be able to protect themselves at polling places, where there is not the same level of security as in some government buildings.

“It’s increasingly challenging when people have AR-15s slung over their shoulder and they’re in a crowd,” Brown said, according to a 2016 Los Angeles Times article. “We don’t know who the good guy is versus the bad guy when everyone starts shooting.”

Open-carry laws could also have a chilling effect “on the constitutionally protected rights of other Americans,” according to the report accompanying the resolution. It notes how gun-control advocates canceled a Martin Luther King Jr. Day vigil in Richmond, Virginia, in January 2020 because of fears surrounding a gun-rights rally happening the same day.

“In effect, the open-carry protesters used an armed heckler’s veto to silence their political opponents,” the report states.

Tens of thousands of people participated peaceably at the rally though authorities had warned beforehand that armed militia groups and white supremacists might attend.