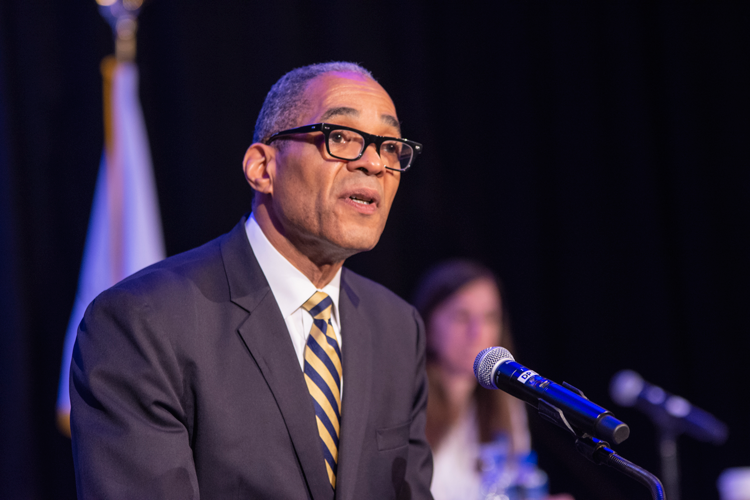 Reginald Turner's desire to serve the bar began when he was a “wide-eyed law student” at the University of Michigan Law School, the ABA president-elect nominee told the House of Delegates at the midyear meeting in Austin, Texas, on Monday.

It was there that Turner said he met Dennis Archer, the first person of color to serve as president of the ABA. He recalls that Archer spoke in “quiet tones of professionalism, diligence, duty, service and honor, and he answered our questions with patience and candor.”

Archer told Turner in response to one of his questions that the most important influence on his career would be adherence to the values that he had described.

“He was absolutely right,” said Turner, who contended that lawyers distinguish themselves by pledging through their oath to support the constitutions of the nation and states, to respect courts and judges and to practice law with civility and concern for both paying and pro bono clients.

Turner is a member of Detroit-based Clark Hill, and he has served as chair of the ABA House of Delegates Rules & Calendar Committee, Committee on Issues of Concern to the Profession and Committee on Credentials and Admissions. He is also a past president of the National Bar Association and the State Bar of Michigan.

He told the House that he has seen the lawyer’s oath come alive each day through the work of lawyers and judges and particularly through the ABA. He encouraged those trusted with bar leadership to be representative of the entire profession, especially in an era where attorneys can get CLE in their pajamas at midnight.

He said members want the ABA to help them be more efficient lawyers and to address public policy issues that are critical to the administration of justice. They also want sound fiscal management of the association’s resources and strongly support diversity and inclusion.

Turner also said the obligation to pursue access to justice—or what he calls “true justice”—can be fulfilled in many ways, including through pro bono publico. Even if attorneys are unable to take on cases for people who cannot afford legal services, he encouraged them to support ABA entities that help meet this obligation.