Resolving court battles related to a condo dispute, a car collision or child custody matter can take months or even years, burdening litigants and the justice system.

With online dispute resolution and “intelligent” dispute resolution, people can reach an agreement without stressful and expensive court proceedings, Salter and Verk said at a Thursday morning panel at the ABA Techshow 2020 in Chicago.

The panel was titled “Online Dispute Resolution: Changing the Status Quo and Defining the Future of Work in the Legal Profession.” Techshow runs through Saturday at the Hyatt Regency hotel in Chicago.

Salter said the Civil Resolution Tribunal, or CRT, was the first of its kind and part of a broader effort to build a justice system from the perspective of the people who navigate it.

Salter stressed, however, that the technology behind the taxpayer-funded tribunal is “actually pretty basic” involving emailing, web portals and messaging.

“You don’t need to be doing all that much to be a bit of a tech superstar on the public justice front, which is not a reflection of how great we are but rather a reflection of the failure of our public justice system to modernize and adapt and use even basic technology,” said Salter, who is also an adjunct professor at the University of British Columbia’s law school. 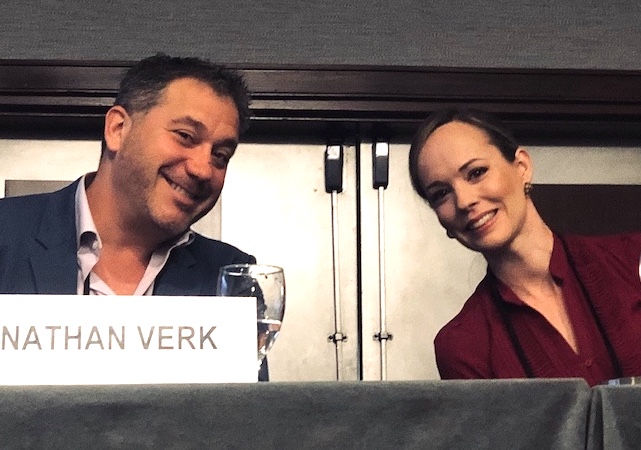 The tribunal helps people resolve claims related to motor vehicle injuries, small claims and condo property disputes from their laptops or smartphones. Salter said the tribunal gives the public the tools it needs to negotiate, and it assigns mediators who can help people agree on and craft tribunal orders. She noted the vast majority of cases is decided without the need for adjudication.

CoParenter is a platform that allows users to create parenting plans and decide everyday issues, such as whether a teen should be allowed to get a mohawk or tattoo. A paid yearly or monthly subscription includes on-demand access to a network of mediators to help the parents reach a resolution if they can’t agree.

He said the platform allows divorced or divorcing couples to interact in a businesslike manner that eliminates conflict. The app uses machine learning to identify hostile language that can derail negotiations.

Verk said he was inspired to create the app after going through a “horrible litigated divorce” and wanted to create an app that would benefit kids who can get caught in the middle.

“I remember sitting in the courtroom thinking two things: Number one, most of us are fighting about co-parenting issues, not legal issues,” Verk said. “Number two, the vast majority of people in that courtroom were unrepresented.”

At this year’s ABA Midyear Meeting in Austin, Texas, the House of Delegates passed a resolution that encourages states to explore innovations that would expand legal services to people who can’t afford a lawyer.

Salter said she did not think that online dispute resolution and other technologies, such as e-filing, e-courts and e-discovery, would solve the access-to-justice problem. But she did say they made life easier for attorneys.