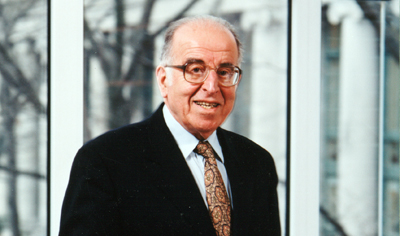 Frank E.A. Sander, a former Harvard law professor and a pioneer in the field of alternative dispute resolution has died at 90, according to an obituary at Harvard Law Today.

Sander began to push for litigation alternatives in the 1970s when courts were facing backlogs amid drawn-out litigation. His idea was for a court official to decide on the best dispute resolution process during intake.

At that time, Sander was a family law professor who also did some side work handling labor arbitrations. He was “struck by how unsatisfactory the courts were for resolving family law disputes and how promising arbitration was for resolving labor disputes,” Sander said in an interview published in 2008 in the University of St. Thomas Law Journal

He jotted down some thoughts on alternative dispute resolution while on a sabbatical in Sweden to study legal issues of unmarried couples and sent them to some Harvard law colleagues. Sander’s memo was forwarded to Chief Justice Warren Burger, who was organizing a conference addressing issues of dissatisfaction with the legal system.

Sander had proposed the idea of a “comprehensive justice center” but his proposal soon had a different name thanks to an ABA publication that covered his Pound Conference talk. “On the cover, they had a whole bunch of doors, and they called it the multi-door courthouse,” he said in the 2008 interview.

Sander was born in Stuttgart, Germany, in 1927 to a secular Jewish family, and escaped Nazi Germany in 1938. He is a graduate of Harvard Law School and clerked for Justice Felix Frankfurter when the court decided Brown v. Board of Education.

Sander was a Harvard law professor from 1959 to 2006, and co-founded Harvard’s Program on Negotiation. He co-wrote the first legal textbook on dispute resolution, and authored 14 books in all.

Sander also started a program that brought African-American college students to Harvard Law School for the summer to spur their interest in legal careers. The program became a model for the Council on Legal Education Opportunity, which has helped developed a national program to expand opportunities for minority and low-income students to attend law school.

The article called Sander “a distinguished scholar, a ruthlessly rigorous judge of quality, a warm and compassionate friend to whom people are drawn, a person who doggedly prepares for each telephone meeting and a positive individual dedicated to making a difference.”

Sander is survived by a daughter, Alison, and two sons, Tom and Ernest.