AG Holder Calls for Getting 'Smart on Crime' #ABAChicago 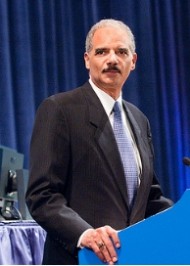 Holder at ABA House of Delegates.
Photo by REP3

Drawing a sharp contrast between the Bush and Obama administrations, without ever naming the former, U.S. Attorney General Eric Holder told the ABA House of Delegates that “we no longer must choose between more prisoners or more crime.”

He declared the Department of Justice under his watch will “embrace the modern, evidence-based process” of policy-making. “We need to move past labels and catchphrases”—such as the slogan “getting tough on crime”—“and use science and data” to drive policy decisions, he said.

“We must be tough on crime, but we must also commit ourselves to being smart on crime,” he said.

Since 2003, spending on incarceration has continued to grow, while crime rates have stopped declining, he said. Now, one of every 100 adult Americans is incarcerated— the highest incarceration rate in the world, he said.

“Even a modest reduction in recidivism would prevent thousands of crimes,” Holder said.

He also promoted more drug courts that push defendants into treatment, rather than prison. “These programs give no one a free pass,” he said. New York state has been a leader on drug courts. In that state, the prison population has dropped by 12,000 inmates since 1999, even while the overall crime rate has declined 27 percent, he said.

In the only section of the speech that was interrupted by applause, he also called on more spending for indigent defense counsel, noting only 3 percent of all criminal justice spending goes toward lawyers for the very poor. Better representation at trial can reduce spending on years of appeals, he said.

“It’s time to move past politics and ideology,” Holder said, “and move forward to a criminal justice system that is fair and effective.”

More on the Annual Meeting ‘09 here:

Interactive updates on the Annual Meeting from ABA Media Relations at ABANow.org.