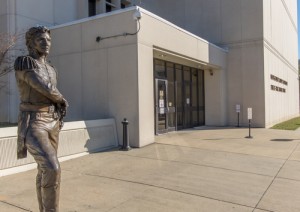 The Alabama Supreme Court will decide whether a black judge’s Facebook post nearly 18 months ago requires his recusal from the murder trial of a white police officer accused of killing an unarmed black man.

The court postponed the October trial to allow lawyers to argue whether Judge Greg Griffin of Montgomery must be booted from the case, report the Washington Post and the Montgomery Advertiser.

Griffin had written a Facebook post in April 2016 that said Montgomery police officers had stopped him as he was walking in his neighborhood with a stick in his hand. An officer had explained he was searching for a suspect holding a crowbar who fit Griffin’s description.

“… I told the officer that the thing in my hand was clearly not a crowbar and walking with a crowbar is not illegal,” Griffin wrote. “The officer said no it isn’t, but when they get these type calls they have to check things out. I soon told them that I was a Circuit Judge and showed them my badge identifying me as such. Throughout the ordeal the officers were courteous; however, it was aggravating to be detained when the only thing I was guilty of was being a black man walking down the street in his neighborhood with a stick in his hand who just happened to be a Montgomery County Circuit Court Judge in Montgomery, Alabama … “

Griffin wrote the post two months after the slaying that resulted in charges against Montgomery officer Aaron Cody Smith, who is accused of killing 58-year-old Greg Gunn after a struggle and chase.

A state police officer testified in a preliminary hearing that Smith had stopped and frisked Gunn without turning on his body camera or his police car’s lights. Smith’s lawyer says a crack pipe fell out of Gunn’s pocket as he struggled to escape.

Gunn fled, and Smith allegedly used a stun gun on him three times, hit him with a metal baton, and shot him five times. Lawyers for Smith say he fired his gun in self-defense after Gunn grabbed a five-foot-long pole from his neighbor’s porch and swung it at Smith.

Griffin had refused to recuse himself, saying the officer who had stopped him was black, and the Smith case was different because it was a murder case, according to previous coverage by the Advertiser.

“You brought race in here,” Griffin told a lawyer for Smith. “I’m a black judge. I can take this black robe off, but I can’t take off this black skin. I live in west Montgomery. I live in the hood. Should I recuse myself from every criminal case that has happened on the west side?”