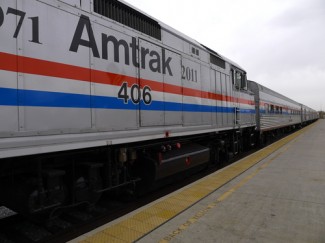 An Amtrak police officer has been charged with murder in the Feb. 8 shooting of an unarmed bus passenger near Union Station in Chicago.

Bond was set at $250,000 on Friday for the officer, LaRoyce Tankson, report DNA Info and the Chicago Sun-Times. Tankson’s lawyer, William Fahy, said Tankson fired his gun because he “reasonably believed he was about to be shot.” The Chicago Tribune and the Minneapolis Star Tribune also have stories.

The victim, 25-year-old Chad Robertson, died on Wednesday. He had been shot in the back. He was in Chicago during a stopover on a bus trip to his home in Minneapolis.

Fahy said in court that Tankson fired after Robertson made a motion as if he were pulling a gun.

A suit filed on behalf of Robertson on Tuesday said he and his travel companions had gone inside Union Station to escape the cold, but the Amtrak officer asked them to leave. The officer was disrespectful and aggressive, the suit alleged. The group left to go to a restaurant, and the Amtrak officer followed them, the suit says.

At that point, the suit alleges, the Amtrak officer and his partner conducted illegal searches of Robertson and his travel companions. Robertson began to run, and the officer stated, “It’s a gun out,” before firing, the suit says.

Amtrak said in a statement that it is cooperating in the investigation.