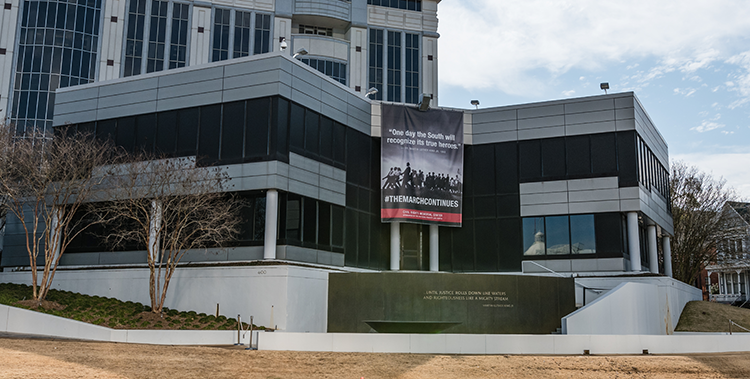 The Southern Poverty Law Center has its headquarters in Montgomery, Alabama. (Photo by JNix / Shutterstock.com)

In its unpublished opinion, a three-judge panel of the 4th U.S. Circuit Court of Appeals at Richmond, Virginia, rejected Glen Allen’s assertion that his membership in the National Alliance wasn’t a “matter of public concern.”

The panel held that as an attorney for the City of Baltimore Law Department—who was involved in a case involving a Black man’s claim of wrongful conviction of murder—Allen’s involvement in the group “plainly is ‘fairly considered as relating to any matter of political, social or other concern to the community’ and is ‘a subject of general interest and of value and concern to the public.’”

The Associated Press reported on the decision.

Allen sued the Southern Poverty Law Center and two of its employees in 2018. According to the opinion, the nonprofit legal advocacy organization published an article in 2016 titled “Neo-Nazi Lawyer Represents Baltimore in Suit Over Wrongful Arrest and 19-Year Imprisonment of Black Man,” in which it described Allen’s “history with organized racism and anti-Semitism.”

The article presented receipts of dues payments Allen made to the National Alliance and evidence that he attended a “Holocaust Revisionist Conference,” the opinion states. After its publication, the City of Baltimore fired Allen from his job with the law department.

In 2017, the Southern Poverty Law Center also published a “hate map” depicting the locations of more than 900 “active hate groups” in the United States, the opinion states. The map included a photo of Allen with the caption, “Exposing Racists Who Infiltrate Public Institutions.”

According to the opinion, the Southern Poverty Law Center obtained the information highlighted in the article and map from an accountant formerly employed by the National Alliance.

It also states the “former accountant illegally removed the documents from the National Alliance’s West Virginia office. Allen alleged the former accountant sold them to the Southern Poverty Law Center for more than $5,000.

In his nine-count complaint filed in district court in Maryland, he claimed the organization misused its tax-exempt status by paying for and receiving the stolen documents. He also alleged that the defendants violated the Racketeering Influenced Corrupt Organizations Act and several state law claims, including defamation and tortious interference with his employment contract.

Allen appealed to the 4th Circuit after the district court dismissed his case in 2019.

In its decision upholding the case’s dismissal on Monday, the federal appeals court said the proposed connection “between Allen’s injury and the Southern Poverty Law Center’s tax burden is tenuous at best.

“Allen does not offer a plausible basis on which to conclude that Baltimore would have continued his employment had the SPLC not been a section 501(c)(3) organization,” the panel wrote.

The 4th Circuit judges said the First Amendment protected the Southern Poverty Law Center’s publication of information it obtained from the accountant. In addition to the other counts, it addressed Allen’s defamation claim, in which he stated that the organization’s reference to him “infiltrating” the City of Baltimore Law Department amounted to false accusations that he was an unethical and incompetent attorney.

In an email to the Associated Press on Monday, Allen said the issues raised in his lawsuit “are important ones, especially in our increasingly polarized society, and merited more than a superficial unpublished opinion.”

He told the publication he hadn’t decided whether to appeal to the U.S. Supreme Court.