Are you a workplace jerk? Overassertive bosses are less likely to hear about it 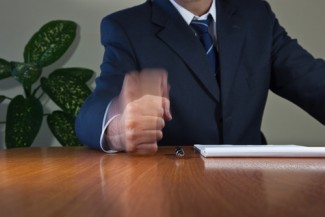 People often have a blind spot when it comes to an assessment of their own assertiveness.

One study illustrating the problem found a big gap in how negotiators viewed their assertiveness and how others saw them, according to Columbia business professor Daniel Ames and doctoral candidate Abby Wazlawek, who conducted the research. They wrote about their findings in the Wall Street Journal (sub. req.).

Negotiators in the study were asked at the end of a negotiating session whether they had been overassertive, underassertive or just right in their assertiveness. They were also asked to judge the assertiveness of others.

Managers and others may lack awareness because of others’ politeness, white lies and desire to ingratiate themselves, Ames and Wazlawek say. “This warped and ambiguous feedback then runs up against two of our own internal tendencies: We often make self-flattering assumptions, and we expect others will agree with us,” they write.

Ames and Wazlawek suggest that managers and others could improve their behavior by gathering anonymous assessments from peers and colleagues, looking for patterns and following up with additional questions. Then they should commit to a small, concrete step to change. “Do something—one thing—that can initiate a process that might lead to greater self-awareness,” they say.

Next:
Banks and law firms are collaborating on project to share info about cybersecurity threats