Artist sues US over Statue of Liberty stamp, says it depicts his Vegas sculpture, not the original 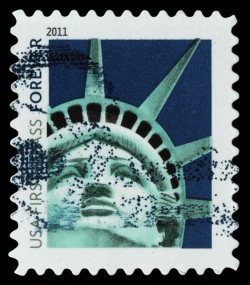 An artist who sculpted a replica of the Statue of Liberty that appears outside a Las Vegas casino-hotel has sued the U.S. Postal Service for copyright infringement.

The USPS used a photograph of the Sin City statue’s head, not the original lady in New York Harbor, on a “forever” stamp, says plaintiff Robert Davidson in the suit, which was filed Wednesday in the Court of Federal Claims. Husch Blackwell partner David P. Hendel, provides a link to the complaint (PDF) on his Contractor’s Perspective blog.

The post office was ordered in September to pay nearly $685,000 to settle similar litigation by Frank Gaylord, the creator of the Korean War Veterans Memorial in Washington, D.C., according to the Associated Press.

The AP article says the postal service used a photo-service stock close-up of the statue’s head for the stamp and didn’t realize it depicted the statue outside the New York-New York Casino Hotel until a stamp magazine ran an article that pointed out the true subject of the image.

Center for Internet and Society: “Stamps, Sculpture and Free Expression”