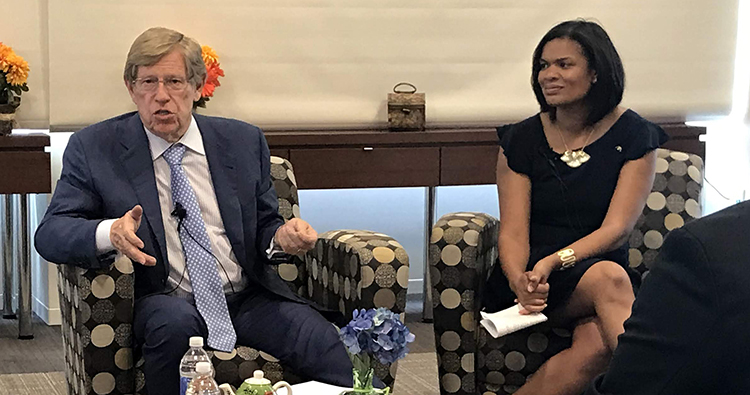 While talking Wednesday about his role in helping bring about the legalization of gay marriage, famed appellate litigator Ted Olson stressed that the fight against discrimination based on sexual orientation or gender identity is far from over.

When asked about Masterpiece Cakeshop decision in favor of a baker who had refused to bake a cake for a same-sex couple’s wedding citing religious objections, Olson said matter-of-factly that the decision “amounts to nothing in terms of precedential value.” He quoted language in both the majority opinion, written by Justice Anthony Kennedy, and the dissent, written by Justice Ruth Bader Ginsburg, that emphasized that the right to marry is fundamental and that, as a general rule, religious or philosophical objections do not allow business owners to “deny protected persons equal access to goods and services under a neutral and generally applicable public accommodations law.”

“That’s the language that’s going to govern how these cases come down,” said Olson, noting that while Masterpiece might embolden people like Kim Davis—the Kentucky court clerk who refused to issue marriage licenses in the wake of Obergefell v. Hodges to same-sex couples due to her religious beliefs—the opinion actually stands for the proposition that “neutral civil rights protections for individuals on the basis of sexual orientation will be treated the same as civil rights statutes that protect people on the basis of their religion, nationality or race and the other things that are protected,” Olson said.

Speaking about his Proposition 8 challenge with moderator Zakiyyah Salim-Williams, who serves as chief diversity officer at Gibson Dunn, Olson introduced and provided context for clips from the documentary The Case Against 8, which chronicled the litigation behind the case that challenged Proposition 8 in California that became known as Hollingsworth v. Perry. The conservative Olson recalled how he and his co-counsel, prominent Democratic lawyer David Boies, used their unlikely alliance (the two went head-to-head in Bush v. Gore) to spear a massive public relations push to try and change the hearts and minds of people in America, which he noted was about 57 percent against marriage equality when the Perry litigation started in 2009.

“We thought we could make a very strong argument from a legal standpoint, but we also thought that the two of us working together was enough of a novelty that would give us an occasion to talk to the American people,” Olson said. “They called us the ‘odd couple’ or ‘strange bedfellows.’” Olson and Boies were victorious at both the trial level and before the San Francisco-based 9th U.S. Circuit Court of Appeals. The Supreme Court, however, did not issue a ruling on the merits of the case, citing lack of standing by the sponsors of Proposition 8.

Olson also spoke about transgender rights, weighing in on the recent decision by President Donald Trump to ban transgender people from serving in the military with certain limited exceptions.

“The same principles apply to transgender individuals,” Olson said. “We have to respect individuals for who they are. These individuals want to serve their country, and many have been in the service for years, and we’re going to tell them they can’t because they’re transgender? That’s outrageous.” On that front, Olson expressed hope that the day will soon come when it’s no longer acceptable to look around a room and ask people what their sexual orientations or gender identities are and force them to use separate accommodations, as a result.

“Most people in this country understand and respect what Justice Kennedy is talking about [in Masterpiece]—respect, decency and dignity of all of our citizens, including citizens on the basis of their sexual orientation, so I’m very optimistic,” Olson said. “But we always have to be fighting.”

Lady Booth Olson, a tax attorney, emphasized that this fight extends to gender equality. “I beg all of the men who love women and love an equal playing field for women that they speak up for the Me Too movement,” she said. “Invite women to participate on an equal footing with men. And speak up against discrimination and oppression.”