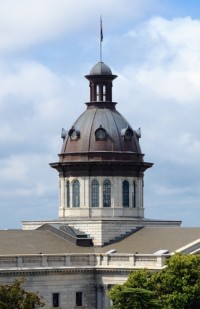 Updated: After more than 13 hours of debate, the South Carolina House approved a bill early Thursday to remove the Confederate flag from the Capitol grounds. Gov. Nikki Haley signed the bill into law later that afternoon, using nine pens she said would go to the families of each of the Charleston church shooting victims.

Pressure to remove the flag intensified after a night of debate in the South Carolina statehouse. A turning point was an emotional speech by lawyer Rep. Jenny Anderson Horne, a Republican from Summerville.

Horne delivered an impassioned speech during the House debate, calling for immediate action to approve the bill. “I have heard enough about heritage. I have a heritage, I am a livelong South Carolinian, I am a descendant of Jefferson Davis, OK? But that does not matter. It’s not about Jenny Horne. It’s about the people of South Carolina who have demanded that this symbol of hate come off of the State House grounds.”

Horne told the Washington Post that her speech was unplanned, but that she was fed up with the prolonged debate as lawmakers wrangled over multiple suggested amendments to the bill. “We had spent an entire day trying to slow this bill down and bog it down and force it to conference committee and drag this debate out for weeks and weeks and weeks, and I had just decided that it was time that somebody stood up and said what was the real issue here.”

Gov. Haley said in a statement: “It is a new day in South Carolina, a day we can all be proud of, a day that truly brings us all together as we continue to heal, as one people and one state.”

The flag will be transferred to a state Civil War relic room at a military museum. South Carolina was the first state to attempt to secede from the United States, and it was the site of the first battle of the Civil War, in which Confederate forces captured Fort Sumter.

The move follows the fatal shootings of nine black church members on June 17. Police arrested a suspect, Dylann Roof, who had posed with the flag in photos posted on a racist website. Among the victims was the Rev. Clementa Pinckney, a longtime Democratic state senator.

In Washington, D.C., meanwhile, the U.S. House voted to ban the display of Confederate flags at historic federal cemeteries in the South.