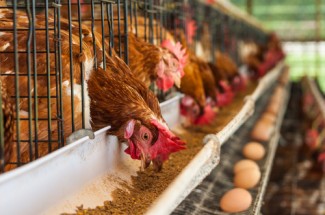 Missouri, Nebraska, Oklahoma, Alabama, Kentucky and Iowa had sued California over rules setting a minimum size for cages used in the production of all eggs sold in the state. If it’s not appealed, the ruling means that the larger-cage requirements will go into effect as scheduled on Jan. 1.

In 2008, Californians approved a ballot initiative banning “battery cages” for egg-laying hens, which are the industry standard. Animal rights activists argued that they are cruel, confining hens to about 67 square inches per bird, less than the size of a piece of letter-sized paper. The law sets a larger minimum standard for cage sizes. The ballot initiative applied only within the state, but in 2010, the state legislature passed a law applying the same standard to out-of-state eggs sold in California.

The six states—all with large agriculture industries—argued that California was effectively regulating out-of-state businesses in violation of the Constitution’s dormant commerce clause. Though the California Legislature’s stated reason for passing the law was to reduce salmonella in eggs, the lawsuit argued that economic protectionism for California egg farmers was the real motivation.

In the alternative, the lawsuit also argued that California regulations are pre-empted by federal egg safety regulations.

Judge Kimberly Mueller of the Eastern District of California ruled that the six state attorneys general had no standing to sue. That’s because they were bringing the action on behalf of the subset of egg farmers who might be affected, she said, not on behalf of their states’ general populations.

“The only citizens who may have to spend $120 million to comply with California’s legislation are the egg farmers who intend to participate in California’s egg market,” she wrote.

According to the Associated Press, the ruling means the suit can’t be amended or filed again, although it could be appealed. A spokesman for Missouri Attorney General Chris Koster said the office is reviewing its options.

The lawsuit came months after the failure of a provision in the federal farm bill that would have prevented the California law. That provision was backed by U.S. Rep. Steve King, a Republican from Iowa, the nation’s top egg-producing state.

A different, also unsuccessful, provision in the farm bill would have made the larger-cage standards national. The Humane Society of the United States told the ABA Journal this spring that it still hoped to pass such a law.