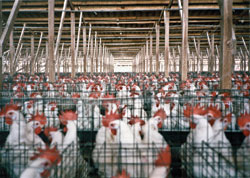 More than 90 percent of U.S. eggs come from facilities where chickens are confined in cramped cages. Photo courtesy of Farm Sanctuary.

Which should come first: California’s right to regulate how eggs are sold or other states’ rights to regulate their farms?

That’s the question that drives six states in their lawsuit against California, filed in federal court in Fresno. The states are taking issue with a California law banning the sale of eggs from hens kept in “battery cages,” which confine chickens to about 67 square inches per bird and which are usually lined side by side in coops. Animal welfare groups say battery cages are cruel because the cages don’t allow hens to walk around, nest or even spread their wings. They say the stress and confinement make hens more susceptible to diseases, including salmonella infection, the major public health concern for eggs.

But battery cages are the U.S. industry standard, used to produce more than 90 percent of eggs. And California imports 4 billion eggs a year, according to the complaint.

That’s why farmers in Alabama, Iowa, Kentucky, Missouri, Nebraska and Oklahoma face a dilemma, says their lawsuit filed in the Eastern District of California. Farmers can make an expensive conversion to larger “colony cages” or cage-free farms, which could make the price of their eggs too high to compete outside California, the suit says. Or they can pull out of California, flooding other states with their eggs and risking a price drop that could put them out of business. Because of these effects on out-of-state farmers, the suit says, the Golden State is effectively regulating interstate commerce, in violation of the Constitution’s dormant commerce clause.

And if California’s law is a health and safety regulation, the states say it’s pre-empted by a federal egg safety law. Such a distinction would make it harder to prove a commerce clause violation because the court must ask whether the burden on commerce is excessive compared to the purported benefits.

The case is being closely watched because its implications could extend beyond the egg industry. Though California is only one of two states to have banned battery cages, it’s one of nine banning gestation crates for pregnant pigs and one of eight banning veal crates. More laws may be coming. And the outcome of this case could affect the chances of passing—and defending—these laws.

California started regulating battery cages with Proposition 2, a 2008 ballot initiative. Effective Jan. 1, 2015, it bans enclosures in California that don’t allow hens, calves or pregnant pigs to lie down, stand up, turn around or fully extend their limbs.

Opponents of the initiative claimed that egg farms would simply flee California or be wiped out by competition from out-of-state producers with lower costs. Perhaps to address those concerns, the California legislature passed AB 1437, a 2010 bill that applies the same standards to out-of-state eggs sold in California.

As the 2015 deadline draws closer, many have opposed the laws. Last year, U.S. Rep. Steve King, a Republican from Iowa—the nation’s biggest producer of eggs—tried to add a provision to a federal farm bill to stop AB 1437. It would pre-empt states from imposing standards on out-of-state agricultural products, if the standards are in addition to regulations from the originating state or the federal government.

The lawsuit claims that by setting standards on how out-of-state eggs can be produced for sale, California is effectively regulating out-of-state businesses. It says that while AB 1437’s stated purpose is to reduce salmonella in eggs, its legislative history is full of references to economic protectionism. For example, an analysis by the California State Assembly’s Committee on Appropriations says, “The intent of this legislation is to level the playing field so that in-state producers are not disadvantaged.”

“Prior dormant commerce clauses have identified the commerce clause itself as a device to guarantee a national free trade marketplace,” says Massey, also a professor emeritus at the University of California’s Hastings College of the Law in San Francisco. “Thus, a state’s desire to … protect local enterprise from outside competition is treated as an illegitimate objective.”

The complaint calls the disease concerns a pretext, alleging that the science connecting battery cages to salmonella is weak. Dr. Rodrigo Gallardo, a molecular biologist at the University of California at Davis School of Veterinary Medicine, says there are papers both supporting and opposing that view.

“In reality, the science on this topic is really conflicting,” he says. “More work needs to be done.”

Cornell University constitutional law professor Michael Dorf isn’t so sure that AB 1437 discriminates against interstate commerce. That’s because it applies the same standards to out-of-state producers that Proposition 2 applies to in-state producers. And he says the discrimination issue may have been settled in 2013, when the 9th U.S. Circuit Court of Appeals at San Francisco upheld California’s ban on foie gras.

Jonathan Lovvorn, chief counsel for the Humane Society of the United States’ animal protection litigation department, adds that the dormant commerce clause theory has been rejected in several similar cases, including one in March in which a federal judge upheld California’s ban on shark fins. But Massey says there was no history suggesting that those bans were a pretext for economic protectionism, as the plaintiffs claim here.

If AB 1437 isn’t discriminatory, Massey says, the court must ask how the burden on commerce compares with the purported benefits. But Dorf cautions that plaintiffs don’t often win this balancing test because courts put “a thumb on the scale in favor of state regulation.”

As an alternative to the commerce clause argument, the six states suggest that if AB 1437 is a health and safety regulation, it is pre-empted by the federal Egg Products Inspection Act. That law says states and localities may not require “standards of quality [or] condition” that are “different from or in addition to” federal requirements.

Kristine Tidgren, staff attorney at Iowa State University’s Center for Agricultural Law and Taxation, says the key is the “different from” requirement. (She emphasizes that this is strictly her own opinion.) The pre-emption language is express and broad, she says.

“If it just prevented state laws that are ‘different from,’ there would be a less strong argument” on pre-emption, she says. ” ‘In addition to’ means that states can’t come up with new quality standards that the federal government hasn’t spoken to.”

Tidgren says whether an egg has salmonella is a “condition” under the EPIA, and thus a state law regulating salmonella would be pre-empted.

The Humane Society moved to intervene in the case March 26. Its proposed motion to dismiss argues there’s no pre-emption because the EPIA regulates things AB 1437 doesn’t cover, like federal egg grades and sanitation at processing plants. It also notes that the act expressly endorses state safety standards consistent with federal law.

“The EPIA is no model of clarity, but at the end of the day, states have a lot of room,” Lovvorn says. “In fact, California has had its own egg safety standards for several decades.”

All of these arguments could be mooted by federal action. A bill before Congress, the Egg Products Inspection Act Amendments, would mandate national standards giving more room to laying hens, as well as “environmental enrichments” like perches. It would pre-empt state laws like California’s.

“A federal law would be a good solution in a case like this,” says Tidgren, because it would end the patchwork of state standards.

Despite a broad group of backers, including retailers and agriculture, the EPIA Amendments did not end up attached to 2013’s farm bill. Some backers have abandoned efforts to pass it—but not the Humane Society.

This article originally appeared in the June 2014 issue of the ABA Journal with this headline: “States Cry Fowl: California’s ban on standard-caged birds poses a chicken-egg problem.”

In print and initial Web versions of “States Cry Fowl,” June, Jonathan Lovvorn should have been identified as chief counsel for the Humane Society of the United States’ animal protection litigation department.