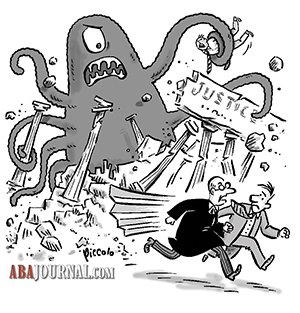 We eyeballed and grappled with more than 100 entries for this month’s caption. Now, we want to know which is your favorite. The caption that receives the most votes will appear in an upcoming issue of the magazine.

• “All I said was: Justice has only one ‘i’!” —Submitted by Richard A. DiLiberto Jr. of Wilmington, Delaware

• “I knew defense shouldn’t have referred to this as a case of squid pro quo!” —Submitted by Scott Briggs of Knoxville, Tennessee

• “The next time you want to bring in a live exhibit, I suggest you be more specific!” —Submitted by Paul Van Lysebettens of Chicago