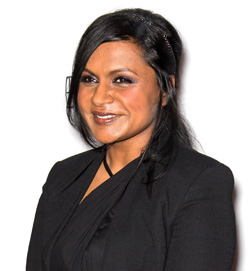 Many Harvard Law School grads will become our nation’s quiet heroes, according to comedian Mindy Kaling, star of the TV show The Mindy Project. “However, those of you who go on to work for Big Pharma or Philip Morris, you will be the loud antiheroes, and someone is certain to make an AMC series glamorizing you, so congratulations. But basically, either way, you can’t go wrong.”

One of the speakers at the law school’s commencement ceremonies, Kaling said she knows a lot about the law “because I sue everybody!” She mentioned the school’s illustrious alumni—Barack Obama and Elle Woods “from the trenchant documentary Legally Blonde.” And she spoke of the future.

“Most of you will go on to the noblest pursuits, like helping a cable company acquire a telecom company. You will defend BP from birds. You will spend hours arguing that the well water was contaminated well before the fracking occurred. One of you will sort out the details of my prenup, a dozen of you will help with my acrimonious divorce, and one of you will fall in love in the process—I’m talking to you, Noah Feldman!”