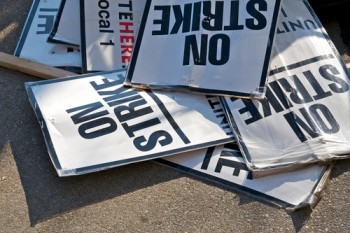 The opinion (PDF) issued Tuesday upheld a finding by the National Labor Relations Board, which ruled that the worker had been “discharged for a prohibited reason – the protected activity of engaging in picketing.”

In 2011, Cooper Tire & Rubber Co. had locked out union workers. After the company later settled a contract dispute, they all returned to work except for Anthony Runion, who had been fired. Runion had shouted at a van carrying replacement workers onto the company’s grounds: “Hey, did you bring enough KFC for everybody?” and “Hey, anybody smell that? I smell fried chicken and watermelon,” the opinion noted, adding that most of the replacement workers were black.

In the 2-1 ruling for the fired worker, Judge William Duane Benton wrote that there was no evidence the replacements heard Runion–though dozens in the crowd did–and the comments were not directed at any individual.

In dissent, Judge C. Arlen Beam wrote that, “No employer in America is or can be required to employ a racial bigot.” He quoted an amicus curae brief from the National Association of Manufacturers, saying that requiring the company to keep Runion on its payroll “is tantamount to requiring that Cooper Tire violate federal antidiscrimination and harassment laws … as well as numerous other similar state and local laws.”

The decision puts employers in the 8th Circuit in “an untenable choice” of whether to prevent racial discrimination or to protect employees’ rights in strikes and lockouts, says Rae T. Vann, managing partner in Washington D.C-based NT Lakis law firm, who filed an amicus curae brief in the case on behalf of the Equal Employment Advisory Council – now the Center for Workplace Compliance.

Cooper Tire said in a statement: “We strongly disagree with this finding and are assessing our options moving forward as we seek to uphold our commitment to a workplace free from harassment and discrimination.”

Lawyers for the steelworkers union did not respond to BNA Bloomberg requests for comment.

Updated at 4:28 a.m. on Aug. 10 to correct information on Judge C. Arlen Beam in fifth paragraph.