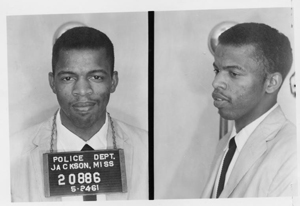 A congressman who tweeted about his release from prison 53 years ago had an educational purpose in mind.

U.S. Rep. John Lewis, D-Ga., posted his mugshot along with this tweet on Monday: “53 yrs ago today I was released from Parchman Penitentiary after being arrested in Jackson for using ‘white’ restroom.”

The tweet quickly went viral, report the Atlanta Journal-Constitution and the Wall Street Journal’s Washington Wire blog. Within 12 hours, it was retweeted more than 22,000 times.

Lewis was a Freedom Rider who challenged segregation and a leader of the civil rights movement that led to passage of the Civil Rights Act of 1964. He told the Journal-Constitution he sent the tweet to “educate and inform people who were not even born 53 years ago.”

53 yrs ago today I was released from Parchman Penitentiary after being arrested in Jackson for using "white" restroom pic.twitter.com/9QAI4voo1M

Previous:
Was law prof's 'frenzied output' worth it? His widow says work devotion came at a price

Next:
Jail visitor is accidentally locked up for 30 hours, finally breaks sprinkler head to escape