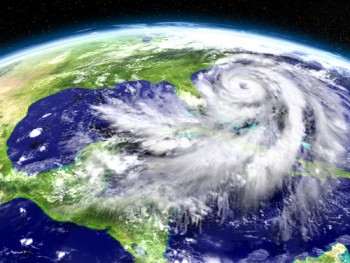 An unnamed hurricane off the coast of the Southeastern United States/Photo courtesy of NASA via Shutterstock.com.

Court officials are preparing for Hurricane Irma's possible arrival in Florida with advance announcements of court closings and an emergency website maintained by the Florida Supreme Court.

The hurricane had strengthened to a Category 5 storm on Tuesday, and it was expected to remain a Category 4 or 5 storm for days, the New York Times reports. The storm was expected to hit the Caribbean before possibly turning toward South Florida.

State courts in Monroe County, which includes the Florida Keys, will close on Wednesday and will reopen Monday, if conditions permit, according to the emergency website and the Miami Herald.

The federal court for the Southern District of Florida announced that the Sidney M. Aronovitz U.S. Courthouse in Key West, including the U.S. Probation Office, will close on Wednesday until further notice. In addition, district and bankruptcy court operations in Miami-Dade and Broward counties, including probation, will be closed on Thursday and Friday.

Classes at the University of Miami’s School of Law are canceled beginning on Wednesday, according to its website. Stetson University’s College of Law, meanwhile, said on Tuesday afternoon that it it is monitoring developments, as is Nova Southeastern University, home to the Shepard Broad College of Law.