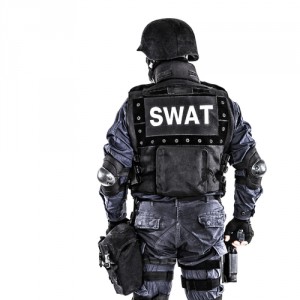 At the beginning of the ABA Annual Meeting event “Peace Officer: How Militarization of Law Enforcement Has Affected Peace Officers and the Communities They Serve,” San Francisco Public Defender Jeff Adachi asked how many in the audience are afraid of police officers.

“Not a lot,” he observed. “You may be afraid after this.”

Indeed, the Sunday morning event, presented by the ABA’s Section of Civil Rights and Social Justice, gave the audience a sobering look at how police use of military tactics and equipment can lead to unnecessary loss of life. Speakers Rashidah Grinage of the Coalition for Police Accountability in Oakland, California, and William “Dub” Lawrence, former sheriff of Davis County, Utah, both told stories about losing family members in confrontations with police that didn’t need to become violent.

Moderator Cathleen Yonahara, a partner at Freeland Cooper & Foreman in San Francisco and vice chair of the section’s Civil Rights and Equal Opportunity committee, explained that the program was inspired by a 2015 documentary called Peace Officer, which takes a look at the militarization of American police forces through Lawrence’s own experience. As sheriff of a county outside Salt Lake City in the late 1970s, Lawrence founded a SWAT team that later killed his son-in-law.

Lawrence explained that his intent with the SWAT team was to deploy it only to neutralize violent situations. Lawrence thought he could talk his son-in-law out of the police confrontation—but by then, he was out of office, and officers told him to move away from the scene. In the end, he said, his son-in-law was “mutilated” by all the shooting. He is now an advocate for ending qualified immunity for police officers. He noted that part of the teachings of his Mormon faith is that all people, when given a little authority, “will immediately begin to exercise unrighteous dominion.”

Adachi, who was first elected as San Francisco’s public defender in 2002, added that SWAT teams may be overused, as many have been sent after nonviolent offenders. A 2014 report from the American Civil Liberties Union, “War Comes Home” (PDF), found that of more than 800 SWAT deployments between 2011 and 2012, 62 percent were solely to search for drugs. That report also found that SWAT teams were deployed against people of color disproportionately; 42 percent of targets were African-American and 12 percent were Latino. This may not be conscious, he said, but could be a result of implicit bias—the subconscious belief that people of color are more dangerous.

Grinage said militarization can be brought back to the issue of who makes decisions and controls law enforcement. Regardless of public opinion, she said, officers won’t be held accountable if powerful police unions have the ear of public officials who make the decisions. She has been working toward greater accountability in Oakland by trying to set up a citizens’ police oversight board with no ties to elected officials and power that’s not just advisory.

“The reality is that if all that happens to you is you get a two-week or six-week paid vacation while you are under investigation, all the while confident that your action will be deemed justified, there’s no incentive to change the behavior,” she said.

She added that community groups like hers need stronger ties with the legal community, which has the money and know-how to make a difference. In Minneapolis, she noted, community groups are currently suing to get a police reform measure on the ballot.

Several of the speakers noted that police militarization rose at the same time as the “war on drugs,” another effort that disproportionately affected communities of color.

“We as law enforcement professionals need public support, we need public trust,” Lawrence said. “That trust has been eroded significantly in the last 30 years.”

ABAJournal.com: “Police use of SWAT tactics has gotten out of hand, says author (podcast)”